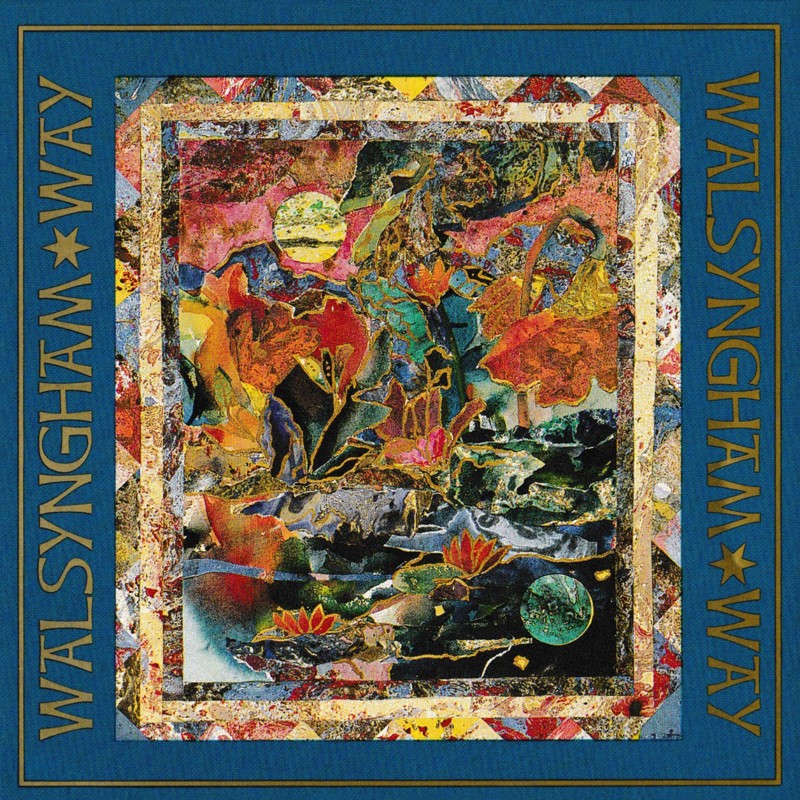 1. Lady Elizabeth's Delight/Spatter the Dew   [5:30]
The first of these two popular Irish slip jigs showed rich harmonic possibilities when Bob arranged it as a slow harp piece. When we found we could weave a second jig into the texture as well, we were just...delighted.
Bob & Linda · harps | Margaret · recorder | Susan · pennywhistle | Paul · guitar | Anne · bronze cymbals

2. Como Poden Per Sas Culpas   [5:11]   CSM  166
Alfonso X of Castile & Leon, 13th C.
This is the first of three tunes on this album taken from the “Cantigas de Santa Maria,” a collection made for [and to some extent by] the devout and musical King Alfonso. It hints at how European music was enhanced by links with Arab civilisation.
Paul · guitar | Linda · tambourine | Margaret · recorder | Bob · cittern | Susan · concertina | Anne · all the percussion within easy reach

9. Paul's Jig   [2:13]
Paul Hammer, 1992.
Realising that Paul rarely gets a chance to demonstrate his prowess as a solo classical guitarist during one of our concerts, we all felt a slight twinge of guilt. This, a jug of wine, and a handsome gratuity from Paul, persuaded us to allow him a brief moment in the sun with his own piece. If you would like to hear more, we recommend Paul's album Starlight Guitar (Sunshine Records SSCT 4158).
Paul · guitar | Bob & Linda · harps | Anne, Linda, Margaret & Susan · vocals

10. Basse Danse "Jouyssance vous donneray" [4:00]
Claudin de Sermisy, France, c. 1490-1562.
In its heyday, a basse danse would often be followed by a faster dance such as a saltarello or tourdion. We prefer to let this one stand on its own.
Bob · cittern | Anne · dumbek | Margaret · recorder | Susan · concertina | Paul · guitar | Linda · tubular chimes 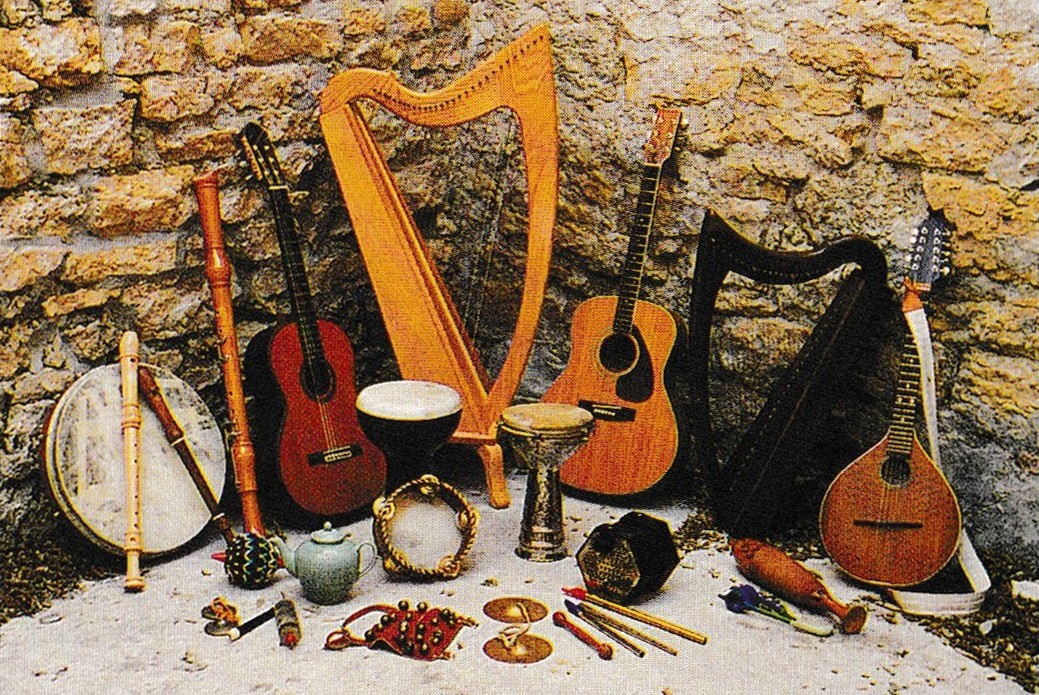 Walsyngham Way condensed in 1984 from a mixture of musicians, artists, history buffs and other stargazers. Our name comes from the ancient notion that the Milky Way is the bridge between earth and heaven; in medieval England, because it resembled a bridge crowded with pilgrims carrying candles en route to a famous shrine at Walsingham, the Milky Way was called "Walsyngham Way."

The music we play has travelled many roads over as much as seven centuries to reach us. Most of our sources give only a bare melody line, a starting point from which to experiment with harmony, rhythm, tempo, and instrument combinations in seeking the sound we want. That sound bridges all sorts of gaps—between medieval and modern, between solemn and silly, between traditional folk and scholarly performance practices. It's a galaxy of acoustic textures and influences, from supple Middle Eastern rhythms to lilting Celtic jigs and reels, from rough-hewn peasant ditties to courtly masques and airs. Bards, monks and minstrels alike might shake their ears, but we think you'll enjoy the music of Walsyngharn Way. 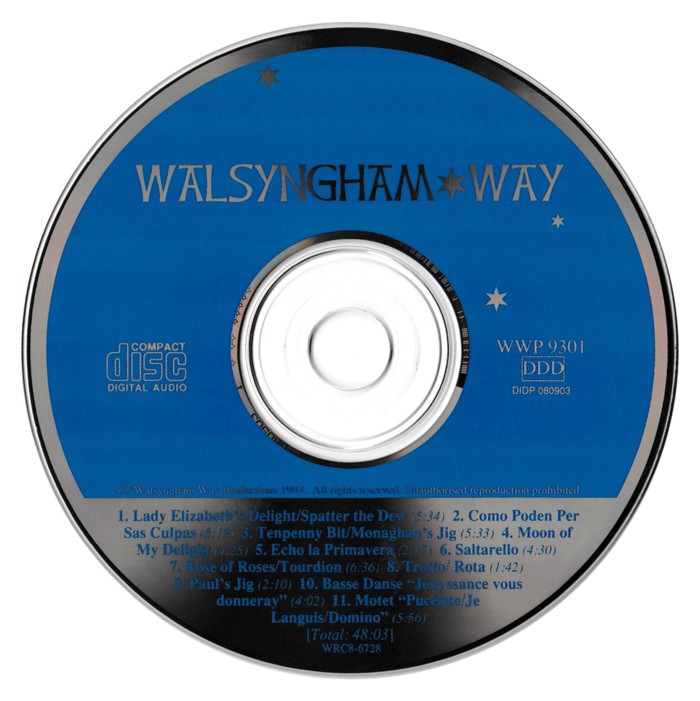 The members of Walsyngham Way individually or collectively want to thank:

A special thank you to Mary McKenty who kept asking when it would be done and would have finished it with her bare hands if necessary.

And a cheerio to Lynette Reid, the only one of us with the good sense to bail out after the first five years.

This album is dedicated to the kids—Christopher, Allan, Grace and Philip—
and offered with our hope for the continual growth of cross-cultural harmony and respect. 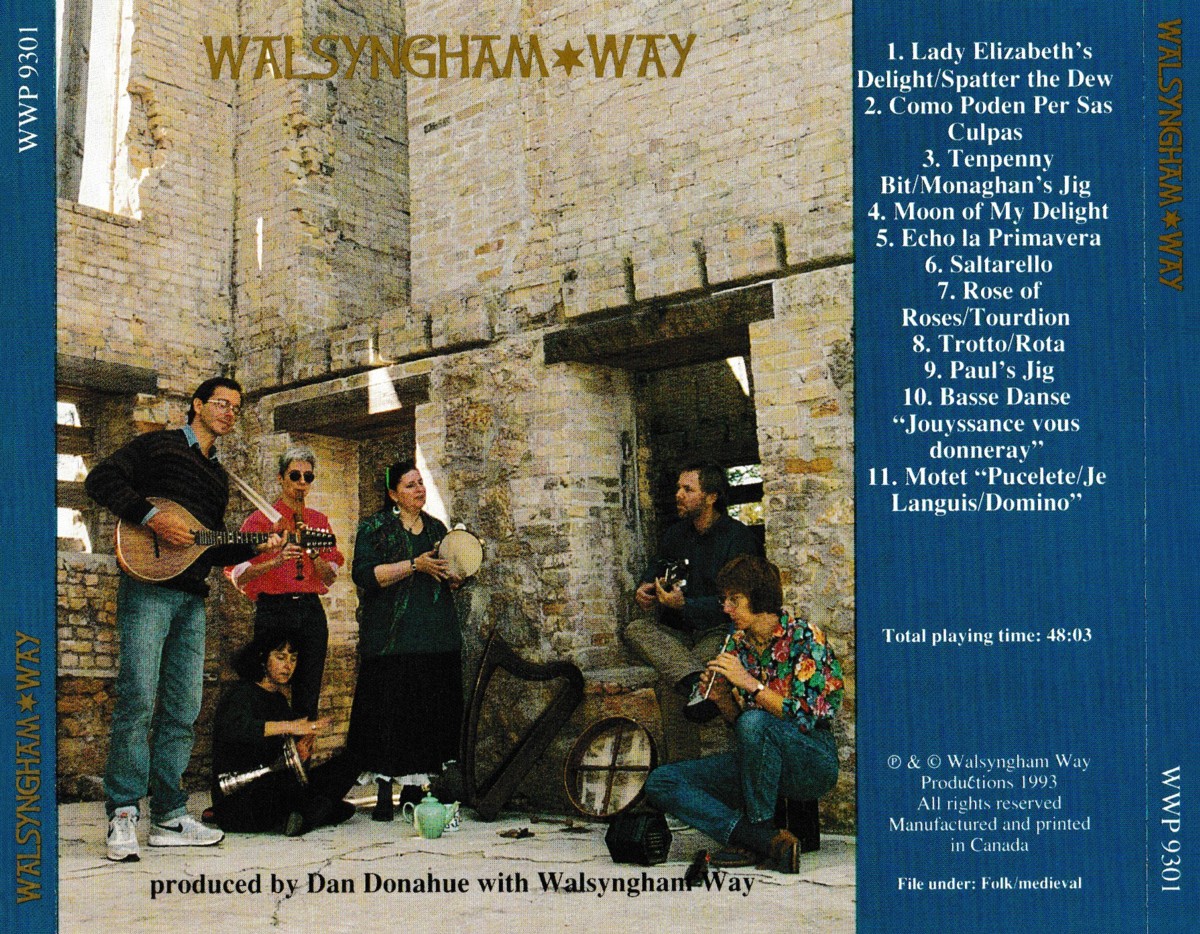