De mar a mar / Sendebar
From Sea To Sea. Music in the Medieval Iberian Peninsula 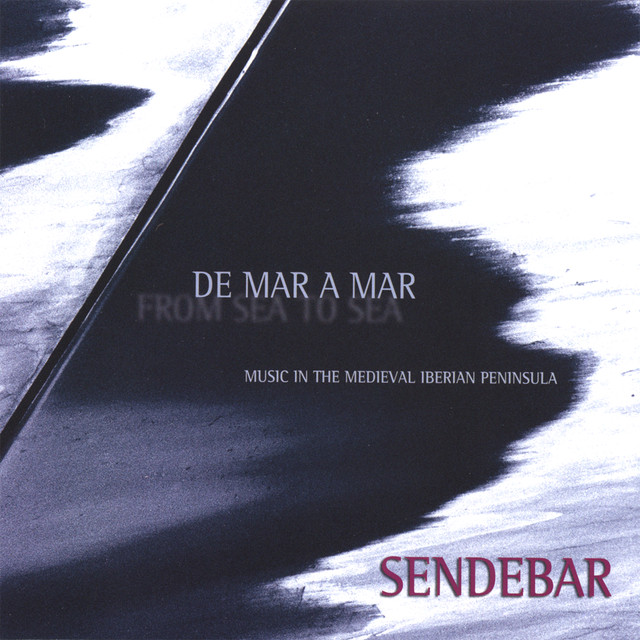 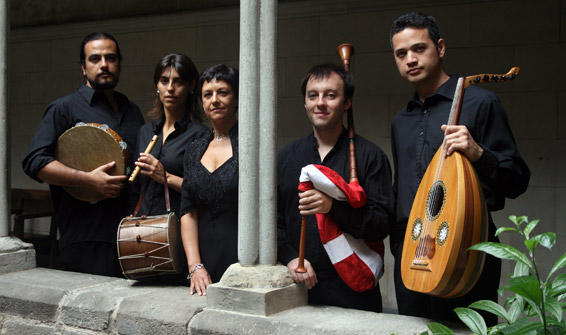 With the Atlantic Ocean in the North and the West and the Mediterranean in the South, the Iberian Peninsula finds itself overwhelmingly framed by the sea. This land that stands only a few kilometers from the North African coast, possesses an astonishing history of cultural exchange between Islamic culture and European Christianity. Our recording "De Mar a Mar," whose title is taken from an expression used by thirteenth-century Galician troubadours to refer to the reunification of Iberia under a Christian banner, explores the rich repertoire of thirteenth- and fourteenth-century Medieval Iberian music composed in connection with some of the most important cultural centers of the Peninsula.

The first two pieces in the recording, Mia irmana fremosa and Quantas sabedes amare amigo belong to the corpus of the so-called Cantigas d'Amigo, a literary genre that consists of a monologue spoken by a young woman who anxiously awaits for the return of her lover. These two songs, attributed to the Galician troubadour Martin Codax (active around 1213), make reference to Vigo, one of the most important Iberian ports on the Atlantic Ocean. As it is also characteristic of the genre, their poems are organized by couplets (groups of two lines) that present "parallelism," a poetic technique in which the text of the second couplet repeats almost verbatim that of the first one. This is device to both intensify the theme of the piece and to unfold systematically each idea in two parallel scripts. The parallelism of the pieces is further enhanced by a procedure called "leixa pren", in which the first line of the third and fourth strophe are identical to the last line of the second couplet. The pieces, as it is also customary of the repertoire, contain each a refrains that diverge from the thematic and poetic structure of the rest of the piece. In terms of the development of the Cantigas d'Amigo repertoire, scholars have suggested that it evolved from an older genre of female songs native to the Peninsula that was formalized by twelfth- and thirteenth-century Galician troubadours who were connected to the intellectual environment of Santiago de Compostela.

The biggest bulk of pieces include in this recording belong to the corpus of the thirteenth-century Cantigas de Santa Maria (CSM), a collection of more than four hundred monophonic pieces in Galician-Portuguese, composed and compiled in Castile in the multicultural court of King Alfonso X "the wise" (1252-1284). The poetry of most of these pieces is narrative and usually recounts miracles performed by the Virgin Mary throughout the known world. In general, the pieces in the corpus of the CSM are comprised of an initial refrain of two or more lines that is followed by a stanza. This stanza begins with a change of rhyme that is heard three times before returning to the original rhyme of the refrain. After that the refrain is presented again. Thus, the CSM poetic structure is constituted by an AAbbba AA rhyme scheme. The correspondence of the Cantigas' strophic form with that of the zejel, the most popular poetic structure in Islamic Iberia, suggest a close relation between the two forms. In terms of their music, the poetic structure of the CSM are often set to a tripartite musical form in which the refrain and the second half of the stanza are set to the same music while the stanza's first half is set to a different melody. Since the music of the refrain is presented again before its rhyme is restituted at the end of the stanza, therefore, there is no exact correlation between the poetic and the music structures. This asymmetry stands as the most representative feature of the repertoire.

Except for one, all the CSM included in this recording follow the above-mentioned poetic and music structures and recount miracles performed by the Virgin Mary in Iberian soil. Of these compositions, CSM 22 and CSM 104 narrate miracles performed in Galicia, CMS 302 and CMS 194 speak about miracles executed in Catalonia, and CMS 166 tells of a miraculous healing that occurred at the church of Santa Maria de Salas in Aragon. Conversely, CSM 340 Virgen Madre gloriosa is an exception to the rule. This piece is not a narrative piece but a lyrical praise-song (Cantiga de Loor) that represents the Virgin Mary as a vehicle between God and his followers. The piece further differs from the others in its lack of refrain, its rhyme scheme, and in that every line, except for the first two, receives a different melody. Scholars have explained that this cantiga is poetically and musically based on Sanc fui belha ni prezada, an alba composed by the Occitan troubadour Cadenet.

The last piece in our recording, Los set gotxs, comes from the Llibre Vermell de Montserrat, a manuscript produced during the early fourteenth century in the scriptorium of the Monastery of Montserrat, the most important pilgrimage center in Medieval Catalonia. We know from an indication that appears in the manuscript that Los set gotxs, as well as the other pieces included in the Llibre Vermell, were composed to be sung and danced by the pilgrims during their stay at the monastery. By prescribing these pieces the establishment was trying to replace the visitors' music, considered to be lascivious and impious, with "honest and devout songs."

Los set gotxs, is the oldest extant piece written in Catalan that celebrates the seven joys of the Virgin Mary, a traditional subject in Catalonian literature. The piece is comprised of a stanza whose text is set to a melody that presents open and close endings (ouvert and clos), and a refrain that is repeated twice. In the manuscript Los set gotxs is described as a ball redon (round dance) a categorization that indicates that the piece was in fact intended to be danced. The inclusion of round dances in the Marian cult is well testified by contemporary musical iconography. The best example is probably one of the illustrations that accompany the Cantiga de Santa Maria 120 from the Codex El Escorial T.J.I. where a group of musicians play honor of the Virgin Mary while a group of men perform a round dance.