Motets from the Song of Solomon from the Italian Renaissance 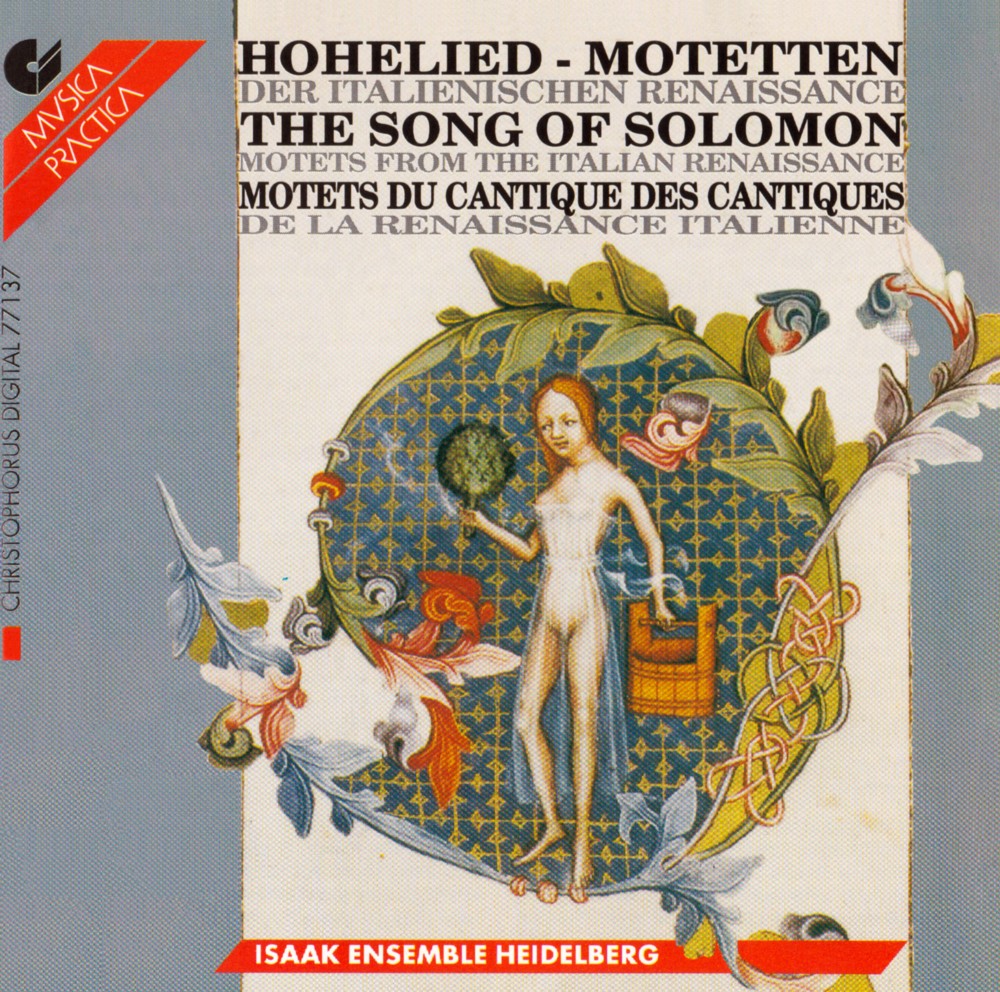 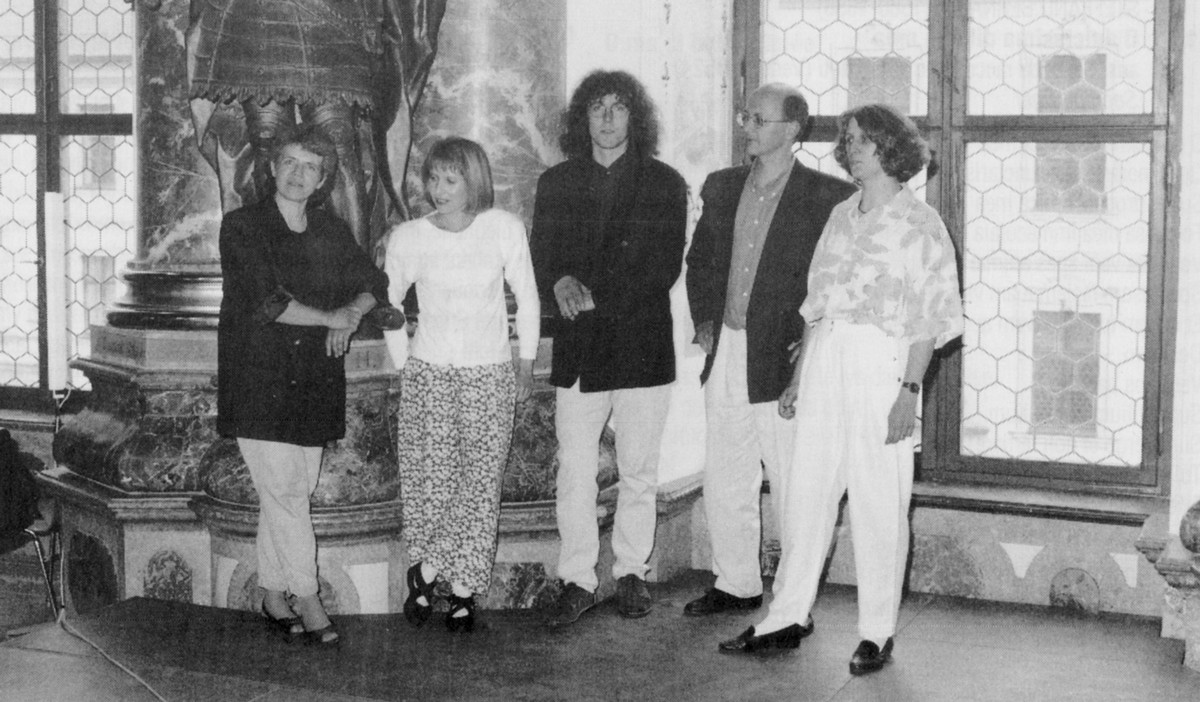 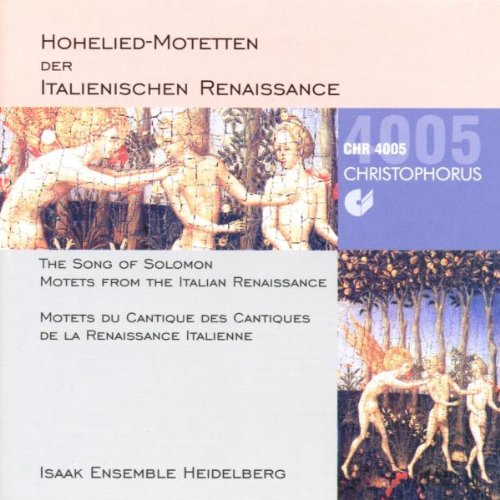 THE SONG OF SOLOMON
AN ENCOUNTER WITH A BIBLICAL PROVOCATION

A Rabbi of the first century answered: "A book of such beauty can only derive from God!" and that proved to be a grave argument in the debate at the end of which the Song of Solomon became part of the Jewish Bible under the name of Schîr haschrîrîm aschär le-Schelômô (song of songs which stems from Solomon).

Looking back into history, we find that the Song of Solomon did not first appear in King Salomo's time and certainly he was not the author. It is a collection from different sources and was published under his name. For Israel this King represented the time of its greatest power and glory.

Recalling the historical schedule we find that in the 3rd and 4th century b.c. a book of poems was compiled (it is difficult to date the single parts exactly), which another three or four hundred years later eventually became part of the scripture. This long period of time also represents the complex cultural context in which the Song of Solomon was written: its roots reaching back as far as Old Egyptian lyrics, the book got its final shape when Near East was, politically as well as culturally, dominated by the Hellenistic Kingdoms of Alexander the Great's successors. Eventually, it found its way into the Bible while the 'world' was under Roman government.

Together with the Old Testament Christianism inherited the Song of Solomon as part of the Jewish Bible, and with it inherited the difficulties to have to interpret the book as Word of God. The history of the Song of Solomon is a history of ethical views changing with time. An uninhibited perception of man not dividing body and soul prevailed in the Ancient Orient where some of the poems were written. The book was compiled during the Hellenistic era when Greek philosophy merged with the old culture of the region. Just before the change of times it became part of the holy scriptures; Jewish sects, slightly later, imposed their ideal of chastity upon the Christian daughter, the world's dominating religion to come.

It was most obvious to interpret the loving relationship allegorically as the relationship between God and his people Israel, likewise as that of God and the Blessed Virgin or the one between Jesus and His Church. It should be mentioned in this context that St.Bernard de Clairvaux - generally not known as a friend of the Jews - recognises two lovers of the Lord: the fair-skinned friend is the Church, the dark-skinned one is the Synagogue.

The different view of our days concerning the human body and its sexuality allow for new messages, which work in a freeing and enriching way:
1. Certainly is love different in its appearences, but renunciation of loving partnership and sexuality does not by itself lead closer to God.
2. By means of love, erotic and partnership, as they are described in the Song of Solomon, men and women anew recreate the likeness of mankind and the God above all antagonism of sexes: both male and female together are "man" as God created them "in our image, after our likeness". With their care for each other mankind perfect one another to become what their Creator had meant them to be.

Furthermore, this interpretation of the Song of Solomon can overcome the polarity of sexes and become a praise of "Love" in general. As this way of interpreting is allegorical again it would probably not remain uncontradicted by modern theologists. The Song of Solomon can like other biblical words be interpreted in many a way, and possibly this is one of the characteristics of the Word of God. The expressiveness of the human language is not enough to carry a message of such importance. So the word-settings gained a special importance, as music maybe is the art which comes closer to divine truth than the spoken word.

The text was especially popular among seventeenth-century composers. The clear separation between sacred and secular music that we know today did not then exist, and a text which speaks so eloquently of longing and desire offered composers the opportunity to bring the expressive devices of opera and madrigals into the Church. Chromaticism, dissonance, text declamation and, to some degree, abrupt changes of key were used to set the texts in a way that moves us still today.

Our selection of settings is limited to composers who either were Italian or who were employed in Italy. In the course of the Counter Reformation, Marian devotion reached its high point, especially in Italy. It is therefore not surprising that the best-known work in honor of the Virgin Mary, Claudio Monteverdi's Marian Vespers, contains in addition to Psalm settings, pieces whose texts are not part of the liturgy proper, but which could have served in place of the repetition of the antiphon. That some of these texts are taken from the Song of Solomon comes also as no surprise. The pieces we have selected could have served a similar liturgical function.

The following year his successor, Tarquinio Merula, was charged with reviving the capella at the cathedral. In addition, Merula worked in Cremona, and served as organist for some years at the Polish court in Warsaw.

Until well into the eighteenth century, musicians were expected to be able to improvise embellishments spontaneously during the performance of a piece. In 1591, Giovanni Bassano, cornettist at San Marco in Venice, published a collection of over fifty such written-out "improvisations" on motets and madrigals of the sixteenth century. The diminution on Introduxit me rex by Palestrina is taken from this collection. In the early seventeenth century, composers began writing works with diminutions as an integral part of the composition.

One collection of such ornamented motets was published in 1612 by Johann Hieronymus Kapsberger, a German who spent his early years in Italy and who is best-known for his lute compositions. We have chosen two motets from the collection.

Steffano Bernardi was born in Verona where he worked for several years at the cathedral. In 1622 he left Verona to join the services of the bishop of Breslau and Brixen, Archduke Carl Joseph. But soon, in 1624 the bishop died and his chapel was dissolved. Bernardi was called to Salzburg, where he stayed until he died of the plague in 1638.

Giovanni Paulo Cima was employed as organist at San Celso in Milan. He included several instrumental pieces in his collection Concerti ecclesiastici, among them the Sonata per Cometto e Violone.

Giovanni Antonio Rigatti became maestro di capella at the cathedral in Udine at the age of twenty. Later, he returned home to Venice and was a singer at San Marco. In 1646 he described himself as maestro di capella for the patriarchs of Venice. He also taught singing at the Conservatorio degli lncurabili, in whose church he was buried in 1649.

Giovanni Martino Cesare was born in Udine, where he also worked for a time as a cornettist. From 1611 he was active in Germany, first in Günzburg and, after 1615, at the court chapel in Munich. Although he himself offered his services to Count Ernst von Bückeburg, Cesare did not appear on St.Michaels Day 1617, when he should have begun the appointment, his reason being, he could not with a clear conscience serve at a Lutheran court.

Girolamo Frescobaldi was born and received his early musical training in Ferrara. In 1604 he went as a singer and organist to Rome where he became a member of the Congregazione ed Accademia di Santa Cecilia. He was chosen as organist at San Pietro in 1608, a position he held, despite interruptions in service, until his death in 1643. 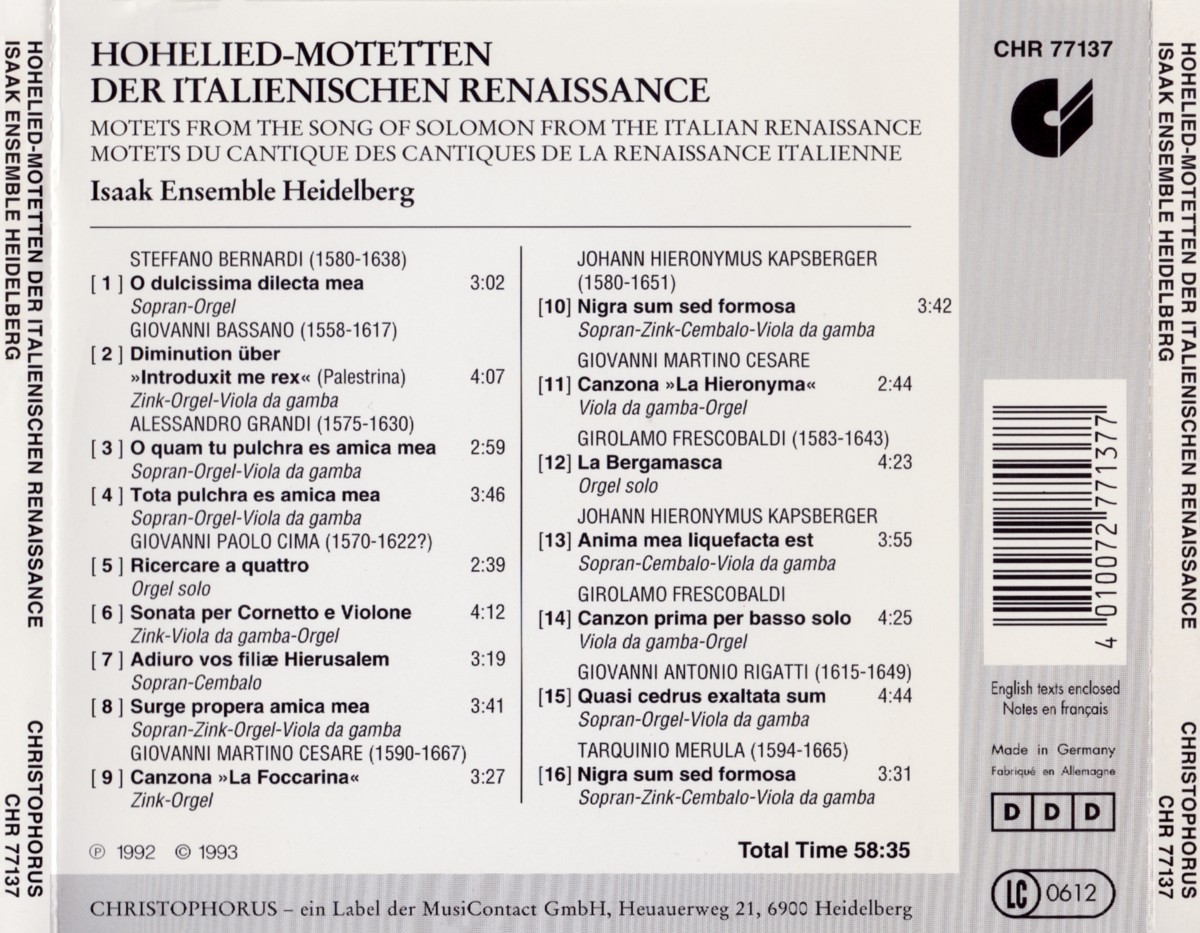