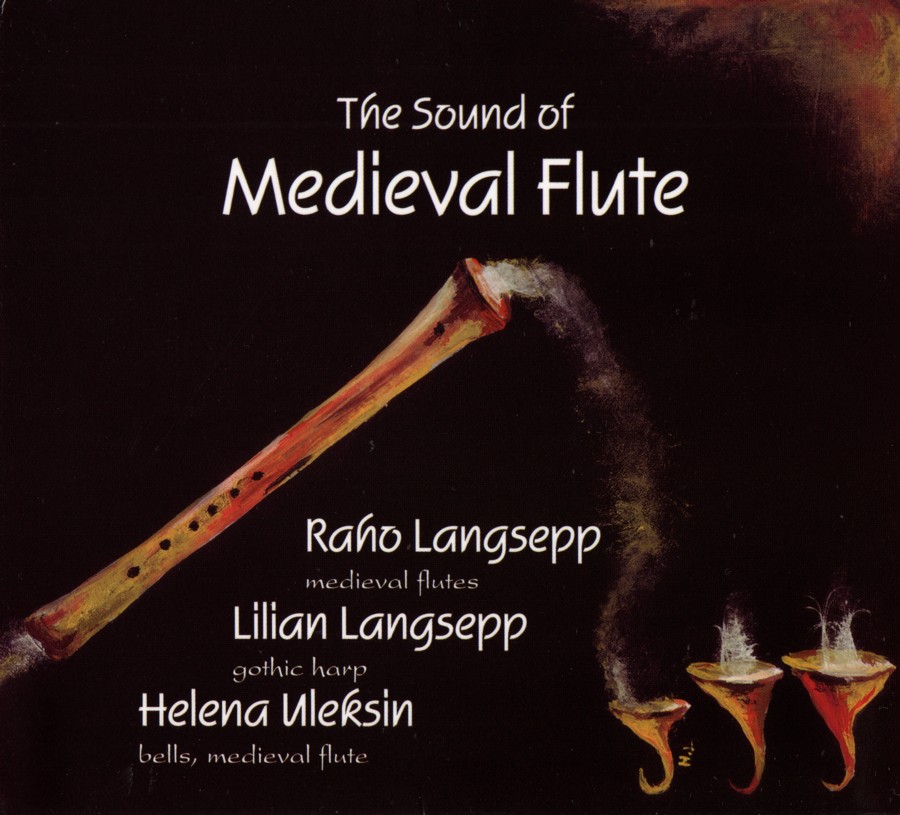 
Tracks 11 and 12 arranged by Lilian Langsepp 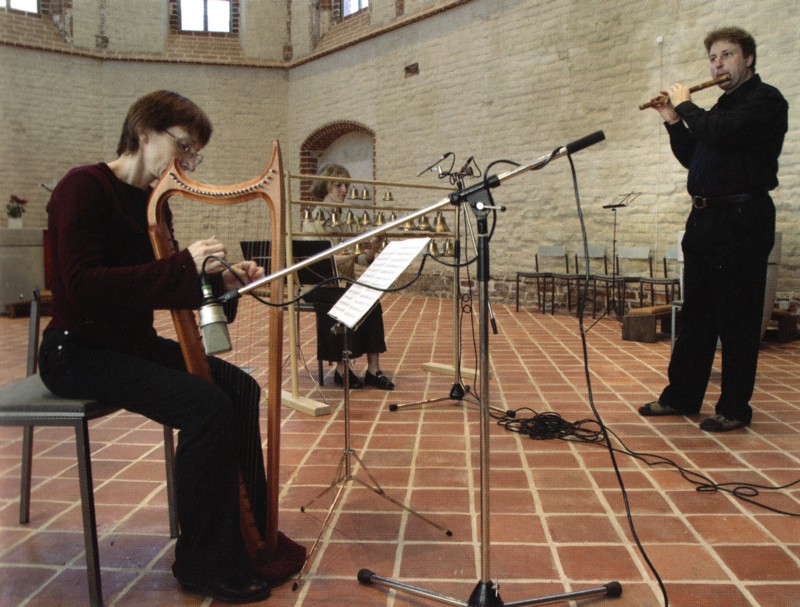 The Sound of Medieval Flute


The selection of the title "The Sound of Medieval Flute" is not fortuitous and aims to intrigue those listeners who know that no medieval transverse flute finds have been reported so far. What kind of transverse flutes were played in medieval Europe and what they sounded like can only be intuited by piecing together a kaleidoscope of information preserved in the graphic arts, in literary and poetic works touching on the performance practice of medieval instrumental music in folk music traditions using similar instruments and—there is no hiding that anyway!—adding a certain measure of personal imagination to the mix. No doubt the medieval transverse flute was similar in its construction to the oldest flutes, reports of which have been recorded in Asia, a part of the world where the instrument enjoys continued popular use to these days. The flutes in question are more or less cylindrical in shape, with six or seven finger holes in addition to the blowing hole. A central question still open to debate concerns the playing technique used by medieval flutists. If medieval flutes had small finger holes, their playing technique could be largely assimilated to those of the Renaissance and Baroque flutes and the recorder, in which cross-fingering is used for obtaining various alterations. If, however, the finger holes of medieval flutes were big, as is the case with the Indian flutes still in use today, cross-fingering would no longer be effective and flutists would have had to resort to half-hole technique in which semitones are obtained by partially opening a hole (by lifting the finger or rolling it upwards). Whether such technique was indeed used in the medieval period has not been conclusively proved or disproved. If we are to consider the fact that medieval itinerant musicians often played out of doors, which required a wider reach of sound of the instruments used, it seems probable that the internal diameter of their flutes and consequently the finger holes were bigger. This presumption is supported by depictions of medieval flutes preserved in the graphic arts, which have been analysed in detail in the work of Liane Ehlich.

It has also been suggested that the medieval transverse flutes are likely to have been used for playing simple diatonic melodies which would not have called for the use of half-hole techniques even if the flutes in question had bigger finger holes. The musicians of the time, however, were professionals for whom playing their instrument was a means of winning their daily bread and who continued to hone their skills throughout their lives. In view of that it would not make sense to suppose that they limited themselves to playing solely diatonic music, avoiding chromatisms and more complicated pieces which are a usual occurrence in the manuscripts of the period. Based on images preserved in the graphic arts works depicting flutists side by side with fiddle players, this author firmly believes that flutes were used to play pieces of a complexity equal to those played on the fiddle, which is suggested to have been the principal instrument used to play estampies. Whether this was achieved entirely by means of half-hole techniques or in a combination with cross-fingering is a matter for conjecture. The aim of this recording is to show that the flutes with bigger finger holes can very well have been employed for playing fully chromatic pieces by using only the half-hole technique. Undoubtedly this choice of technique results in the creation of ornaments different from those characteristic of cross-fingering and enables the musician to alter the pitch of notes flexibly and smoothly, thus opening new possibilities for interpreting medieval instrumental music.

As regards the material used to make flutes, graphic arts fragments clearly point to bamboo, yet it is highly probable that flutes were made chiefly of wood and bone. This is likely to have been so because of the problems encountered by bamboo instruments in drier regions and certainly also because of the fact that bamboo is not native to most of the European territory. Magnificent-sounding transverse flutes, however, can also be made of clay. Due to their deep and mellow sound, we have preferred bamboo instruments for recording this CD. Three bamboo flutes have been used: those in g (South Indian bamboo, tuned by V. Hemapala Perera) and in G and c (respectively North and South Indian bamboo, tuned by Raho Langsepp). In order to preserve the unique sound of each instrument, inside oiling has been foregone.

The Consort's choice of the instruments including in addition to the flutes also a harp and a bell chime serves to highlight the nuanced and refined sound of the musical material performed. We support the view according to which, unlike in Renaissance music, the emphasis of the medieval period was not placed on varying the sound of the pieces played by using a multiplicity of instruments representing different musical timbres but rather aimed to achieve a maximum of nuance and expression on one single instrument.

The bell chime (A—f') consists of bells made by the Swedish family firm "Morells Metallgjuteri AB", established in 1920. In founding and hand working their bells the firm employs traditional methods descended from their forefathers.

The world of medieval harps was amazingly rich in varying sizes, shapes and numbers of strings. The harp used to record this album is a copy (made in 2000 by the German master harp maker Eric Wilhelm Kleinmann) of the instrument that was purchased in mid-XIX century for the Wartburg Art Collection and in all likelihood used to belong to the famous Minnesinger Oswald von Wolkenstein (1377-1445). The slim, Gothic-looking harp has 26 strings (G—d'''), which are tuned diatonically. To play semitones, the resonant length of the strings has to be reduced. In the estampie "Palamento" this is achieved by two different techniques: the harpist uses the fingers of the left hand to press the string against the harmonic curve of the harp (which raises the pitch by a semitone) or against the bray pin on the sound box of the harp (which raises the pitch by a full tone).

In addition to wide musical range owing to the number of strings fitted on the instrument the Wartburg harp is characterised by a rich timbre and lends itself easily to dynamic playing techniques. For instance, in the estampie "Tre Fontane" this is demonstrated by backing the high-resister glissandos played by the right hand with low-register accompaniment played by the left. It is also noteworthy that the entire instrument is equipped with L-shaped bray pins permitting the player to create a vibrant buzzing sound characteristic of medieval harps. By varying the position of the pins, the harp can be used to play quietly yet in a highly nuanced dynamic manner. In rendering the estampies recorded for this CD a combined approach has been used, with lower strings tuned to resonate with a buzz and the higher in a regular manner.

This CD is based chiefly on two Italian manuscripts: the London, BL. Add. 2.9987 and Codex Rossi.  Dating from 1400, London, BL. Add. 29987 is one of the central sources of medieval monodic instrumental music available today. Through this manuscript a number of long and extremely interesting estampies have been preserved for us, shedding some light on the structure, sonic texturing and ornamentation of the 1 4th century instrumental music. We know today that Arabic music exerted a considerable
influence on the development of European music. Indeed, an Oriental flavour can surely be felt in the estampies in question, yet they remain unmistakably European. Estampies have typically four to five verses, which are repeated twice: with an 'open' and a 'closed' ending. The next verse often incorporates a substantial portion of the previous one, so the verses gradually grow in length. The first verse usually introduces the main mood of the piece, the second verse takes the piece into a high register and the third into a low register. As a rule, the final verses have varying time signatures, often also changing the mode (of the piece). All estampies in this manuscript are replete with chromatisms and run rather long. In recording this CD, we have worked with a facsimile edition of the manuscript. Occasional variations in note length and pitch result from personal preference and improvisation.

Codex Rossi (compiled in Venice c. 1340) is one of the earliest sources for the Italian Ars Nova style. The pieces it contains are vocal as in numerous other 14th and 15th century manuscripts. Still, some researchers claim that the music in these manuscripts may also have been performed instrumentally. In terms of musical genres, Codex Rossi contains madrigals, caccias and ballatas.

The Centre of Early and Oriental Music Festivitas Artium Schola, founded as a collaboration between the University of Tartu and the concert agency Festivitas Artium in January 2000, is a natural development in early music research and study in the University of Tartu. It also continues the work of the ensemble Via Sonora and contributes to carrying on the tradition of the Tartu Early Music Festival. The aim and mission of FA Schola is to use music and music research to compare and present the traditional cultures
of medieval Europe and the Orient. The Centre has brought together a medieval consort the members of which also teach a variety of instruments. As to the Centre's name, the original meaning of 'schola', a Greek loan word in Latin, was 'spending time together intelligently', a sense that was later conflated with the familiar and more modern meanings of 'teaching' and 'erudition'. FA Schola appreciates both the ancient and the modern meanings—besides regular studies and teaching activities, the Centre organises many concert projects, enlisting professional musicians and occasionally students from Estonia as well as abroad. 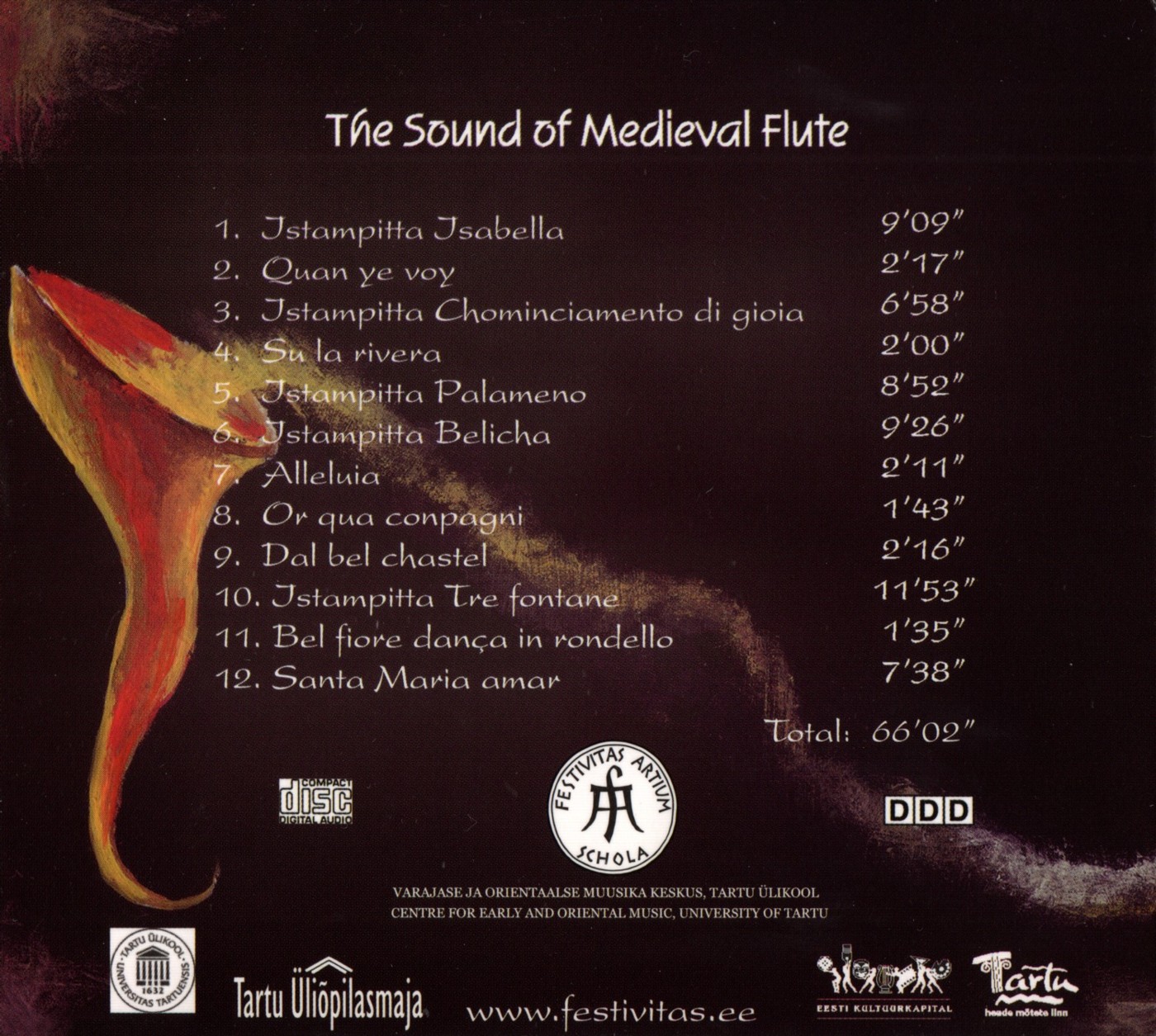