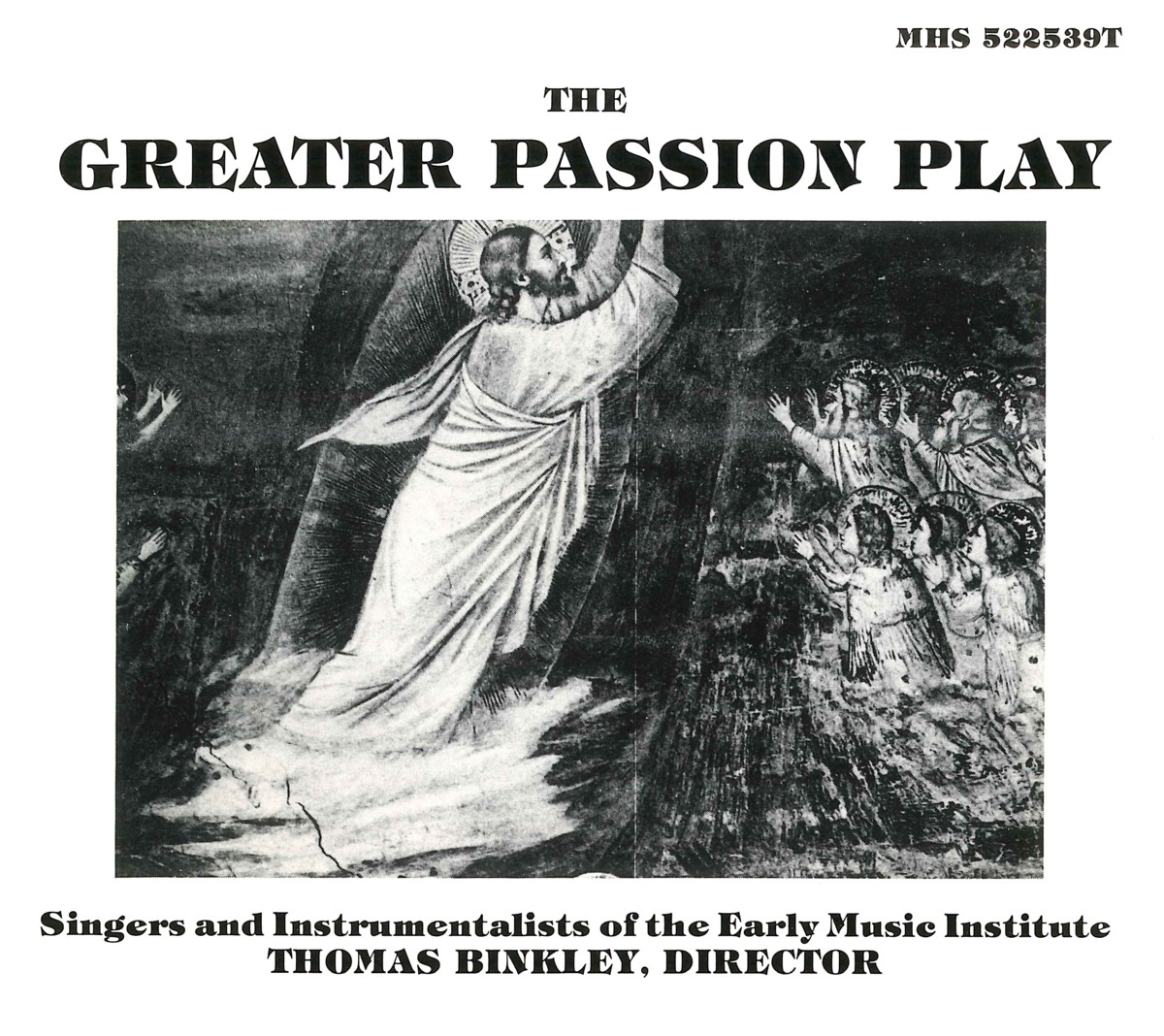 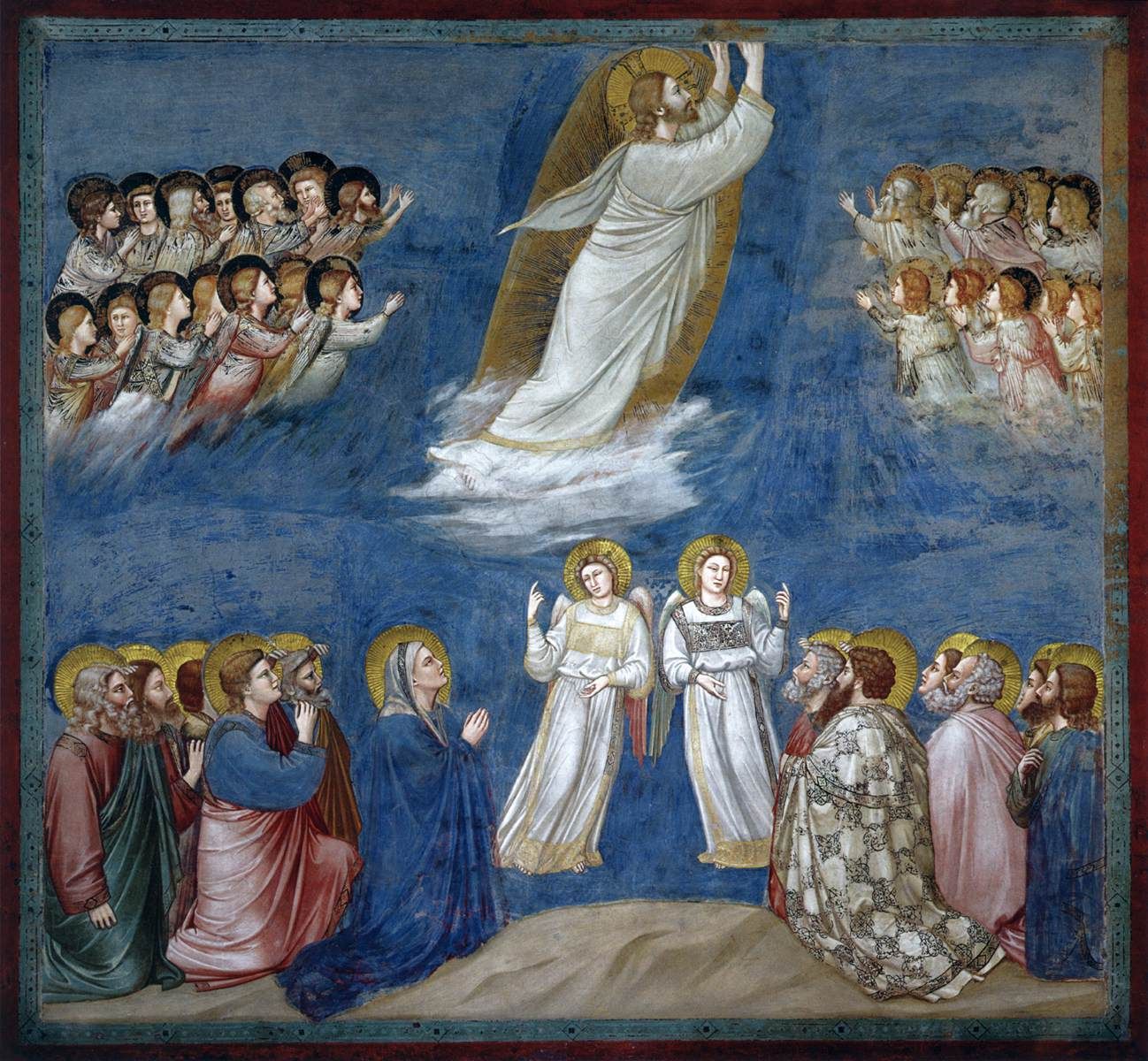 The first modern production of The Greater Passion Play was presented on March 15, 1982 in Bloomington, Indiana.
The premiere was followed by several performances at The Cloisters, Metropolitan Museum of Art, New York City.
This production was repeated the following year.
For all of these performances Ross Allen was the Stage Director and Max Rothlisberger the Scenic Designer. 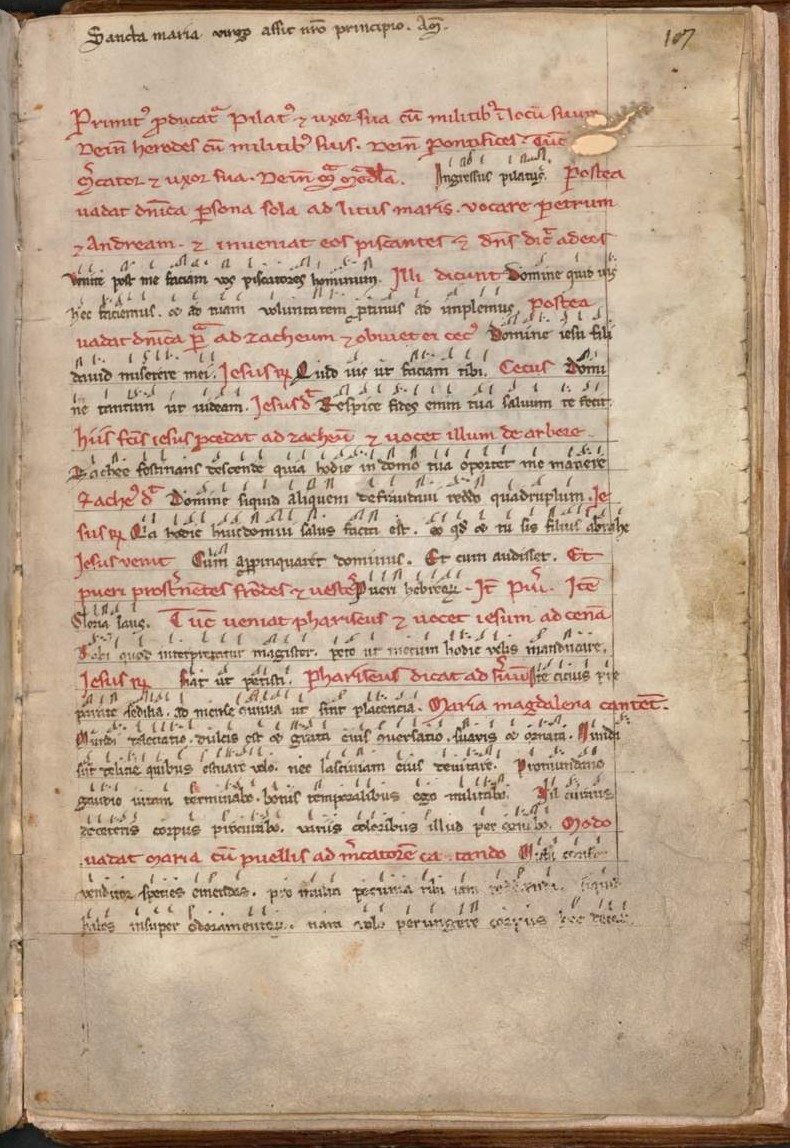 The Carmina Burana, Latin manuscript 4660 in the Bavarian State Library in Munich, is one of the most famous of all medieval manuscripts. Discovered in the early 19th century at the Benedictine monastery at Benedictbeuern in Bavaria, it is now preserved in incomplete form. The place of its origin is uncertain. The manuscript is best known for its extensive collection of love lyrics, student songs, and religious poetry written in both Latin and German. In typical medieval fashion, the compiler seems to have collected whatever was pleasing to him, or to his patron, without caring about giving his materials any definite arrangement or even indicating the authorship of each work. Paleographical, linguistic, and art historical considerations suggest that the manuscript was written in Southern Germany in the early 13th century. We do not know the identities of the original owner or the scribe, nor do we know the purpose for which the book was made.

In addition to its better-known lyric materials, the Carmina Burana contains four sacred music-dramas, including two passion plays, a Christmas play, and an Easter play. There is also a fragment of a drama entitled "The King of Egypt." The source or origin of these plays is unknown (though clearly they come from German-speaking lands), and it is possible that they were entered into the manuscript a few years after it was otherwise completed.

Those who have heard The Greater Passion Play will agree that it is one of the most forceful dramatic creations of the Middle Ages. It may come as a surprise, then, to learn that the text and the music were not originally composed for the play, nor were the individual lines originally designed to be heard in the sequence in which we encounter them here. Our play is entirely a composite creation. With a few exceptions, all of its textual and musical lines are derived from the liturgy, the Bible, preexisting Latin and German songs, and, apparently,
another German vernacular play. Only the rubrics, or stage directions, were written especially for the play. The artistic achievement of the drama lies not in the creation of the texts and music, but in the selection and arrangement of materials from a vast repertoire.

The composite nature of the play accounts for the discernible differences in literary and musical styles which characterize it. The liturgical materials, often ornate, are sung in a declamatory manner in which verbal rhythm determines musical rhythm and which is unmeasured throughout. Those portions of the play that are taken directly from the Gospel accounts of Jesus' passion in Matthew, Luke, and John are presented in the simple and straightforward tones employed for the singing of these passages during the Holy Week liturgy. The two Latin laments (Planctus ante nescia and Flete fideles) are strophic sequences; for this recording they were transcribed from French and Italian manuscripts where they are presented in complete versions and in clear musical notation, in contrast to their abbreviated form in the Carmina Burana manuscript. Instrumental music has been added for those pieces that are not, strictly speaking, liturgical.

For all of its diversity, our play exhibits a unity of affect and of purpose. Clearly our playwright was not interested in creating a new literary or musical work. Neither did he set out to present a historical account of the passion of Jesus; had such been his purpose, he would have used the biblical accounts at his disposal and omitted the liturgical texts which disturb the narrative continuity. His goal seems to have been to create a kind of sacred representation of the Passion which would draw on familiar pieces to create an emotional response in his audience, one which would emphasize his chief thematic concerns: redemption through renunciation of the world (the Mary Magdalene sequences) and the cost of mankind's salvation as demonstrated in the enormous grief of Mary at the foot of the cross.

The Play contains six episodes: The early ministry of Christ, including his entrace to Jerusalem; Mary Magdalene, her sin and redemption; the raising of Lazarus; the Mount of Olives, including the betrayal and arrest of Jesus; the trial before Pilate and Herod; the crucifixion and death of Jesus, with the laments of Mary. Each of these episodes is constructed separately; surprisingly, Judas provides a thread by which they are connected. Between each of the sections is a short exchange which relates to Judas' career. Following Jesus' entrance into Jerusalem, there is a brief monologue in which arrangements for the dinner at Simon's house are made. It is at this dinner that Judas is first to murmur against his master. Following the Mary Magdalene episode Judas expresses his outrage at Jesus for permitting Mary Magdalene to anoint him with expensive oil. After the raising of Lazarus, Judas offers to betray Jesus. Following the Mount of Olives dialogue between Jesus and his disciples, Judas commits the actual act of betrayal by kissing Jesus, and Jesus admonishes Judas for his deceit: Then, at the conclusion of Jesus' trial, Judas attempts to return his blood money to the priests and is seduced by the devil to hang himself.

The texts and music settings for these short exchanges in Latin are unique in that they come neither from biblical nor liturgical sources. To be sure, Judas is twice allowed to utter biblical lines, but only when addressing Jesus. In contrast, with the single exception of the parable which he tells Simon the Pharisee, Jesus speaks only biblical or liturgical lines throughout the play except when he addresses Judas. Thus Judas is kept on a separate plane from the other characters. His own speech is denied the authoritative language and music of the liturgy and the Scriptures, and he is not addressed from that context.

The characterization of Judas is in some ways similar to that of Mary Magdalene, who sings in both German and Latin. The bilingualism of Mary's lines is symbolic of her role as a typical human being caught between the world and the things of God. Our playwright also allows the Virgin Mary to address the audience in German, apparently in order to move us with her easily understandable and highly emotional expressions of grief. German is also used at the play's end, in Longinus' statement that Jesus was "truly the Son of God." This line is a straightforward translation of the Latin line which precedes it and thus makes emphatically clear the perspective from which the excruciating death of Jesus is presented to us.

This ending provides us with insight into another of the playwright's concerns. He has selected the events he includes in order to show that the moment of bitter suffering is also the moment of Jesus' triumph, if only his audience will see it properly. For him, the suffering Christ is also Christ the King. Indeed, the kingship of Christ is repeatedly emphasized throughout the play. From the initial processional piece with which the play opens, we are confronted with the connection between Jesus' kingship and his suffering and death. As Jesus tells Pilate, his kingship should not be confused with earthly kingship or judged according to the standards of the world. His kingship involves rejection, sacrifice, pain, and death. This kingship is defined in the repeated refrain from the ninth-century Palm Sunday hymn which is sung
when Jesus enters Jerusalem: "Glory, praise, and honor be to you, O Redeemer and King."

In The Greater Passon Play, for Jesus to be king he must also be redeemer, and describing and defining the redemption that Jesus brings is another of the play's concerns. From the very first episode Jesus is seen calling men and women to himself, meeting their physical needs, and forgiving the sins of those who ask. Early in the play Jesus restores sight to a blind man; at the very end once-blind Longinus claims that Jesus is God's Son. Yet such insight is an exception in the play in which many people remain blind to what is happening before their very eyes. In this blindness most of the crowd rejects Jesus' kingship ("We have no king but Caesar") and mocks him even to the bitter end. The last line of the play has one of Jesus' detractors say, "He saved others; himself he could not save." Thus the play appears to end in defeat, but the playwright means for his audience to have the insight which the crowd lacked and to see that it is precisely this moment of apparent defeat that makes Jesus a king. 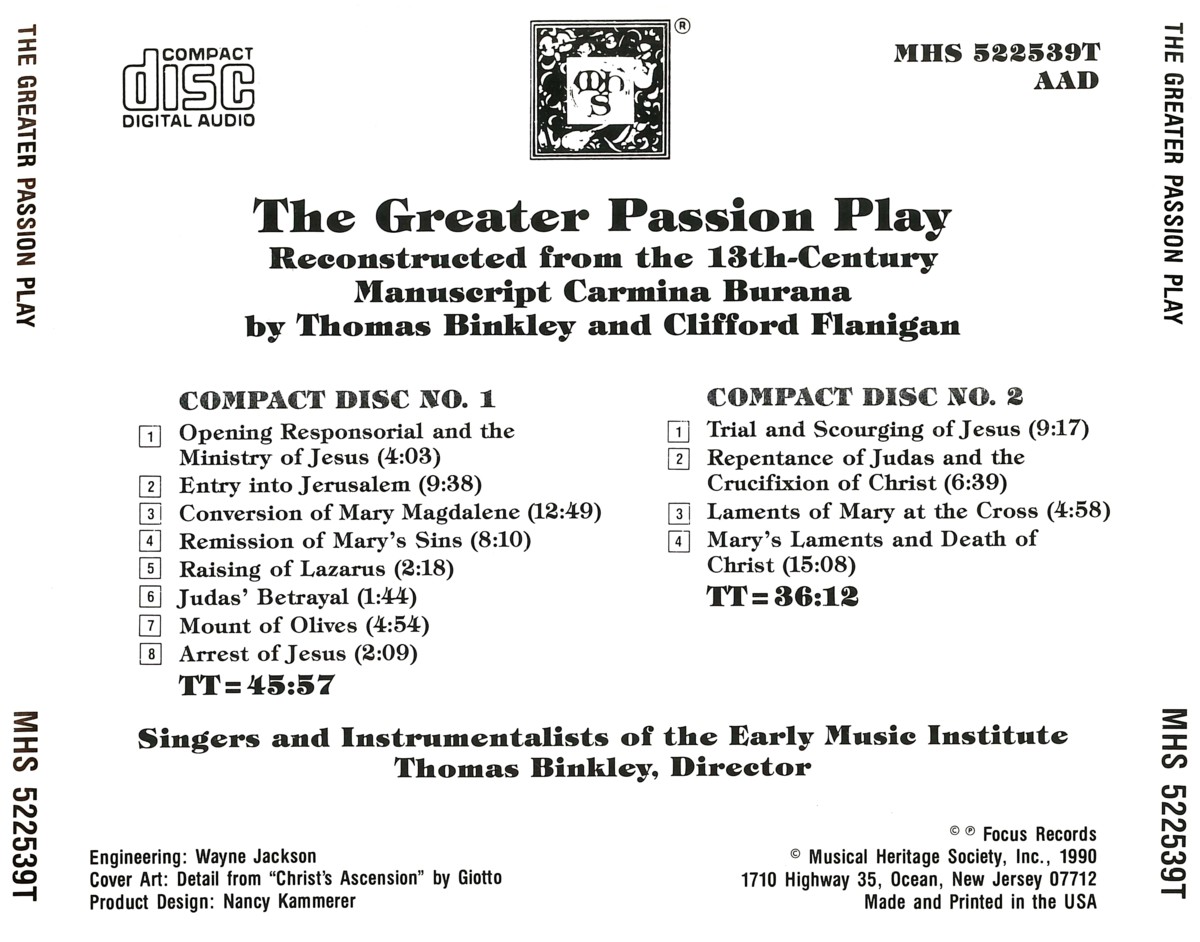