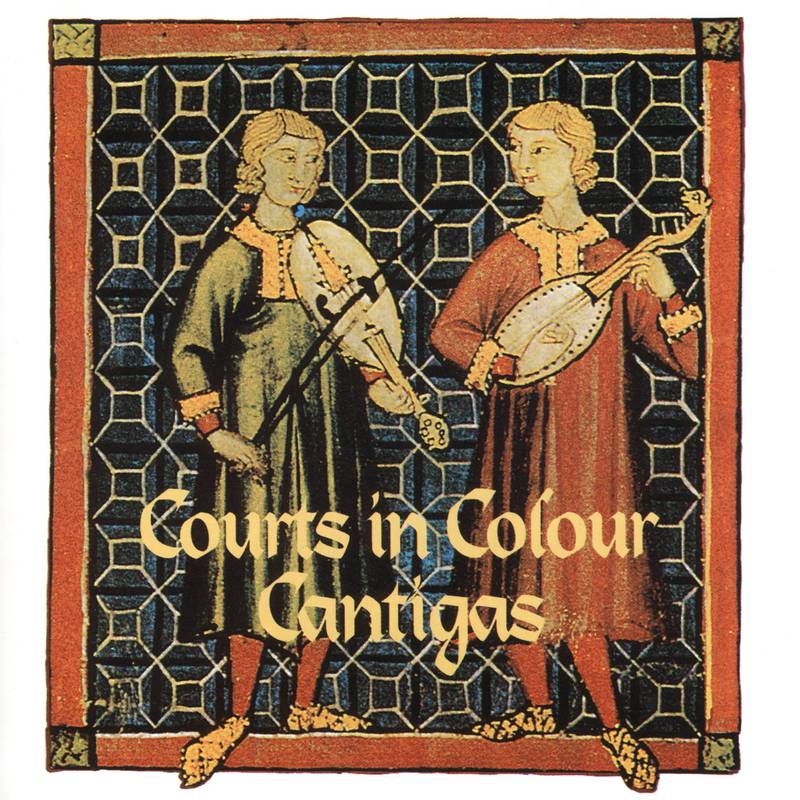 I  Eleanor of Aquitaine

All pieces are Cantigas compositions based on original melodies


Cantigas plays a repertoire of mediaeval and folk-based music from Europe, Asia and the Middle East. The group explores instrumental sounds and timbres using hand-crafted Australian reproductions of period instruments. The group generally plays in mean-tone temperament and at the pitch A466 as it is believed that pitch was higher in the Middle Ages. The music is all monophonic, that is single line melodies and in most cases merely fragments.
Cantigas thus recreates the music of the Middle Ages with authentic compositions which use techniques of mediaeval performance practice such as counter-melodies, drones, rhythm parts and much creative improvisation.

Courts in Colour was recorded in Move studios at Eaglemont in digital stereo and in single takes with no mixing.
Cantigas aims to produce a sound that is true to a spontaneous performance with live improvisation. 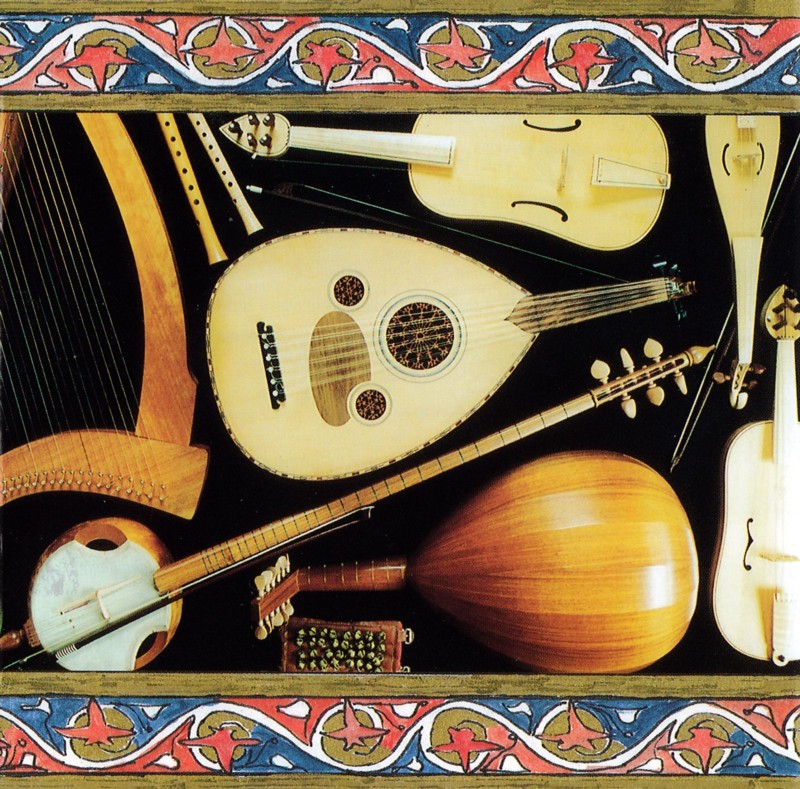 Eleanor of Aquitaine (1122-1204) was a highly influential patron of the Arts and a key political figure. Twelfth-century France was a place of relative peace and a renaissance in artistic and intellectual pursuits. Her court at Aquitaine was a melting pot for various folkloric and narrative traditions; it was here that the troubadour arts flourished, influenced by the ideal of aristocratic courtly love. The troubadours themselves came from all walks of life; from kings (Richard I of England) to servants (Bernart de Ventadorn). They were, however, a class of well-educated men, the majority of which were minor nobility, mainly landless second sons. The historical evidence for the lives of the troubadours are a series of biographies called Vidas and commentaries, Razos, although these are not entirely reliable as they tend to be derived from the poems themselves. The troubadour movement encouraged the rise of secular song, influencing the trouvères in northern France and the Minnesingers in Germany. Cantigas uses the differing timbres of mediaeval European instruments including the hurdy-gurdy, lute, vielle, rebec, and harp.

The greater part of the Jewish population in the Middle Ages lived in the Muslim world in such countries as Palestine, Persia, Syria, Egypt, North Africa and Spain. There were four central authorities which governed over the body of customs and laws encompassing every aspect of Jewish life from ritual to routine. One of these authorities was the Palestinian Academy in Jerusalem whose head was entitled the 'Gaon of Tiberias' (1000-1077). This academy claimed a particular standing in the Jewish nation directly related to the importance of the Holy Land and the Holy City. It was not only a place of study but also an important element in the structure of Jewish autonomy recognised by the Muslim authorities. The head of the Academy was the officially recognised representative of Palestinian Jewry in its dealings with the local government in the capital Ramle. The Academy is expressed through rhythmic Hebrew melodies, reflecting the festive dancing of the Jewish people with exotic sounds of the recorder and the Arabic drum, the darabouka.

Saladin, Sultan of Egypt (1145-1234), was the archrival of Richard the Lionheart and succeeded in bringing the Muslim factions together to fight against the Europeans in the Third Crusade. His empire included Egypt as well as Syria and parts of Turkey. He was a devout Muslim and was thought of very highly by his contemporaries, both friends and enemies. The intimate quality of this art-music is expressed by taqsims, that is, long improvised introductions exploring the maqams or scales of the piece and by using ethnic Arabic instruments such as the oud, yayla-tanbur and darabouka. The music is characterised by the additive rhythms such as 10/8 and 7/8 and the melodic subtleties of quarter-tones and Middle Eastern tuning systems.

Alfonso X, 'the wise', King of Castile and Léon (1252-1284) was a very important patron of the Arts in the Middle Ages. He deliberately promoted the rise of the vernacular, using Castilian as the language of law, history and official records. The translation of scientific and philosophical works from Arabic flourished in his court. Alfonso's tastes were wide-ranging; he wrote books on chess, astronomy and history. The music of this court is all taken from the lavishly illustrated manuscript Cantigas de Santa Maria. This collection of four hundred songs was assembled at the court of Alfonso and recounts miracles of the Virgin Mary. The simple melodies are influenced by the troubadours; many fled south to Northern Italy, Sicily and Spain to escape the Albigensian Crusade of 1209. Some sought refuge at the cosmopolitan court of Alfonso X which became a place for the gathering together of intellectuals; Arabs, Jews and Christians. This is portrayed by the use of instruments from the East and the West and is linked by a subtle yet lively string sound. 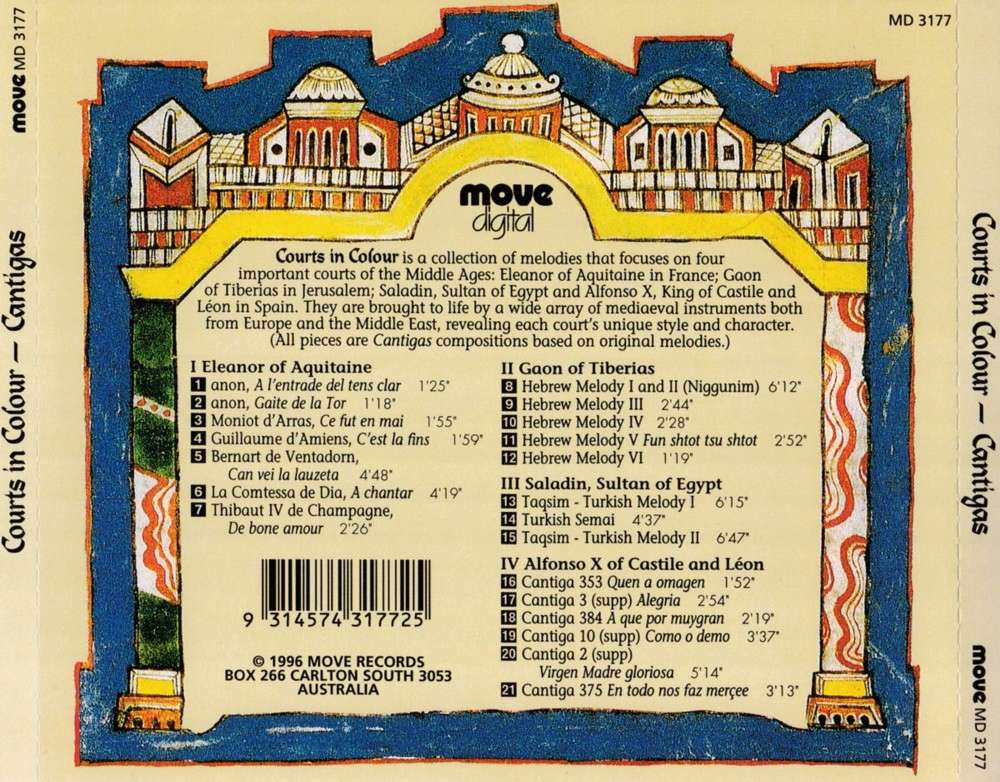