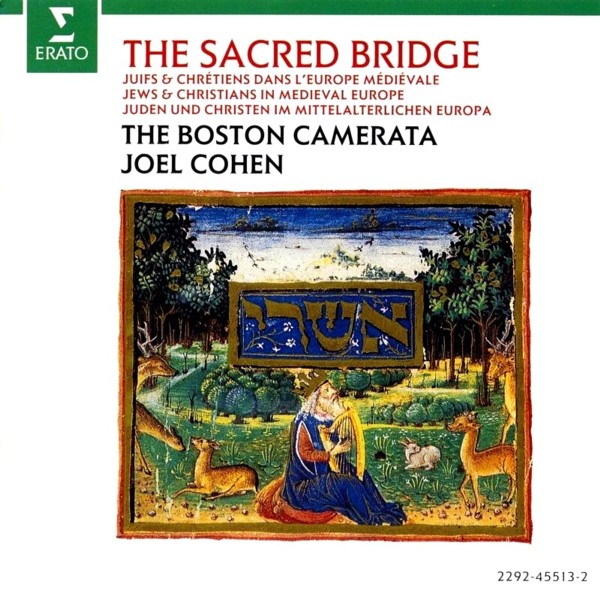 Much of the music contained in this recording was produced in the saddest and most shamefully cruel corners of old Europe - its ghettos. Yet Jews and Christians, though frequently forced to live apart, were in many ways, both large and small, dependent on each other. This program (whose title is derived from the late Eric Werner's pioneering study of Jewish and Christian liturgical music, "The Sacred Bridge") attempts to trace some of those ways through the music and poetry of pre-enlightenment times.

I. SONGS OF EXILE
1. בורא עד אנא · boray ad ana | Criador hasta quando  [3:58]  sephardic, Jerusalem
Anne Azéma, Michael Collver
CREATOR, UNTIL WHEN. A number of religious songs in the Sephardic (Spanish-Jewish) tradition exist in both Hebrew and Spanish versions. Our performance draws on the tradition of improvised, ad-hoc heterophony prevalent in the prayer rites of many Jewish congregations, both Oriental and European.

2. על נהרות בבל · al naharot bavel  [2:14]  sephardic / Psalm 137
John Fleagle
BESIDE THE RIVERS OF BABYLON. One of the most famous psalm texts, in transmission from the Sephardic community of Jerusalem.


II. THE SACRED BRIDGE
3. In exitu Israel — בצאת  ישראל · b'tset ysrael  [2:45]   gregoriano — ashkenazy / Ps.114
John Fleagle, Michael Collver, Joel Cohen
WHNE ISRAEL CAME OUT OF EGYPT. This melodic fragment is in all probability the oldest music on this, or anyone else's, compact disc! Preserved independently of each other in separate medieval European traditions, these two psalm-tones  Christian and Jewish  are nearly identical, and must therefore have a common, pre-Christian source. We can thus date this recitation formula from (at the latest) the period just preceding the exile of 70 A.D. In all likelihood, this is music that the historic Jesus knew.

4. מי על הר חורב · mi al har horeb  [5:11]
OBADIAH the Proselyte. Eulogy of Moses, s. XII — John Fleagle
WHO STOOD ON MT. HOREB. Most ancient Jewish song, like most Oriental music in general, belongs to the realm of oral tradition, and was never written down before modern times. Here, from the twelfth century, is the earliest notated work in the history of Jewish music. We owe its existence to a Sicilian monk, Giovanni, who, converting to Judaism, moving to Egypt, and taking the new name of Obadaiah, brought with him into the Jewish community his knowledge of medieval musical notation. The original manuscript, notated right-to-left, is in very poor condition; even the meaning of the clef, indicated by the Hebrew letter "daleth", is uncertain. This is nonetheless a beautiful work. In keeping with our undertanding of medieval monodic practices, we have supplied hypothetical instrumental accompaniments.


IV. JEWISH FOLKLORE OF THE MEDITERRANEAN BASIN
a) The Jews of Provence
7. Cansoun d'Ester  [1:34]  Carpentras, s. XVIII
Text: "Lou Tragediou de la Reine Esther" — Melody: "L'Air du Postillon"
John Fleagle, Anne Azéma
THE SONG OF QUEEN ESTHER. Perhaps inspired by the liturgical dramas of their Christian neighbors, the pre-emancipation Jews of Provence developed a liking for their own religious plays. The "Tragediou de la Reine Esther' (which served as a model for the Lunel-Milhaud opera "Esther de Carpentras") is one such surviving example. The eighteenth-century text of the original play indicates music at numerous points; we have adapted a melody, known to be current in Provence at the time, whose rhythmic scansion matches precisely the Judeo-Provençal text.

8. Eftach sefatai  [3:25]  chant de circoncision, Carpentras, s. XVIII
Michael Collver, Anne Azéma
EFTACH SEFATAI (Circumcision song). From the community of Carpentras comes this charming song, half Hebrew and half Provençal, narrating the biblical tale of Abraham, Sarah, and the three angels. The tune was notated in the late nineteenth century, but is probably older; the ad-hoc instrumental obbligato is ours.

b) Spanish Jewery in exile
SEPHARDIC FOLKSONGS. These folksong are drawn from the oral traditions of Jewish communities in Morocco and the Balkans. The Sephardic Jews clung tenaciously to their Spanish language and customs, despite the forced exile of 1492. Much of this repertoire, preserved and transmitted by women of the community, has to do with love, marriage, and weddings. Although Arabic and Turkish style traits are easily discernible, the texts and the melodies also preserve many elements of fifteenth century Iberic culture.
9. Morena me llaman  [2:59]  THE DARK-ONE — Anne Azéma
10. Yo 'hanino, tu 'hanina  [1:30]  I AM HANINO, YOU ARE HANINA — Joel Cohen
11. En ciudad noble y encina  [0:57]  Instruments
12. Desde hoy mas, mi madre  [1:09]  HENCEFORTH MOTHER — Ellen Hargis
13. La rosa enfloresce  [3:38]  THE ROSE BLOOMS — Anne Azéma


V. SONGS OF MYSTICAL SPAIN
14. Respóndemos, Dio de Abraham  [2:15]  sephardic, Jerusalem
John Fleagle
ANSWER US! O GOD OF ABRAHAM. Sung here in a Judeo-Spanish transmission, this text was originally conceived in Hebrew.
Both "Respóndemos" and "Virgen Madre" invoke divine assistance; and both begin with a rhetorically striking leap of a fifth.

16 - [5:38]
Kaddish   (instruments)
A Moroccan version of the prayer for the dead, here performed instrumentally to serve as a ritornello for the following song. The initial melodic cell of this Kaddish melody (degrees 1-9-3-2-3 of the modal scale) suggests a relation to the Sybil song with which it is here juxtaposed.
Madre de Dios, ora pro nos  (Juyzio Sibila) · CSM 422
ALFONSO el SABIO — Michael Collver
MADRE DE DIOS. One of the many medieval transmissions (but the only one surviving in Galician) of the Sybil's prophecy. Versions of this song, which is attributed to St. Augustine, exist from the ninth century onward in Latin, Catalan, Spanish, and Provencal. A Renaissance French version has been recorded by the Camerata on Erato and yet another version from nineteenth-century America (!)

17. Dos oge mas quer eu trobar   [3:16]   CSM 1
FROM THIS DAY HENCEFORTH. This narration of the Nativity, like all the thirteenth century Spanish melodies we include, are from the same source: the "Cantigas" complied at the court of King Alfonso el Sabio, who also claimed authorship of the manuscript. This anthology of miracle-songs about, and dedicated to the Virgin, contains numerous illustrations of Christian, Muslim, and Jewish musicians performing on a wide variety of muskal instruments.
ALFONSO el SABIO — John Fleagle

18. Gran dereit  [1:25]   CSM 56
ALFONSO el SABIO — instruments
Another of the Cantigas melodies, in a performance featuring instruments similar to some of those depicted in the manuscript source.

19. Cuando el Rey Nimrod  [3:14]  sephardic
Lynn Torgove
WHEN KING NIMROD. The "holy light in Jewry" seems to be derived from the Christian legend of the star of Bethlehem, while the melody is in the Turkish-Arabic mode of Hejaz: a good example of the cross-cultural syncretism that is the theme of this recording.

20. אחות קטנה · a´hot ketana   [2:36]
Attribué à Abraham, cantor de GÉRONE (cantor of Gerona), s. XII — Anne Azéma
A'HOT KETANA. In this poem of medieval lberic origin, the "little sister" is a metaphor for the Jewish community in exile. The melody, preserved in oral tradition, cannot be dated with the same accuracy as the text, but is probably very ancient at the root.
Hebrew text by R. Abraham Hazan (page 1)

22. אל נורא עלילה · el nora alila  [2:16]  sephardic
Anne Azéma
SONG OF THE NEILA. This text and one variant or other of the melody are sung by Sephardic communities at an intensely emotional moment of the religious calendar; as the Yom Kippur (Day of Atonement) draws to a close, the heavenly Book of Life is closed for another year.
We have found versions of this melody in the oral traditions of Jewish communities in Bayonne, the Balkans, and Morocco. When such widely-separated groups share similar musical traditions, we can with reasonable certainty trace the music back lathe same source: pre-1492 Spain.
Hebrew text by R. Moses Ibn Ezra 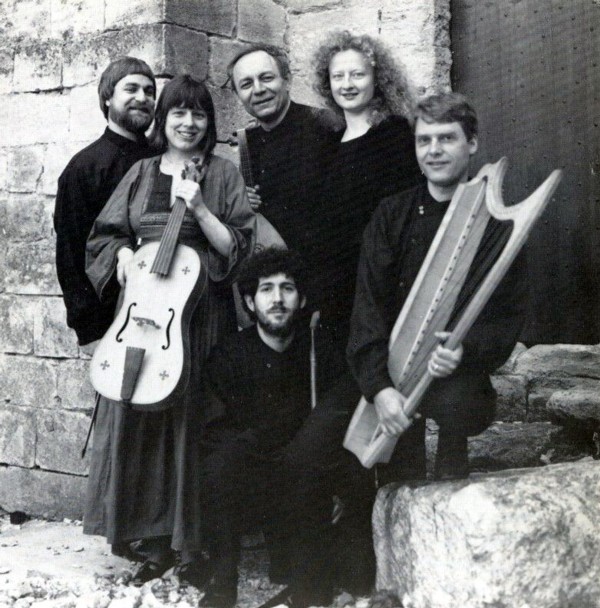 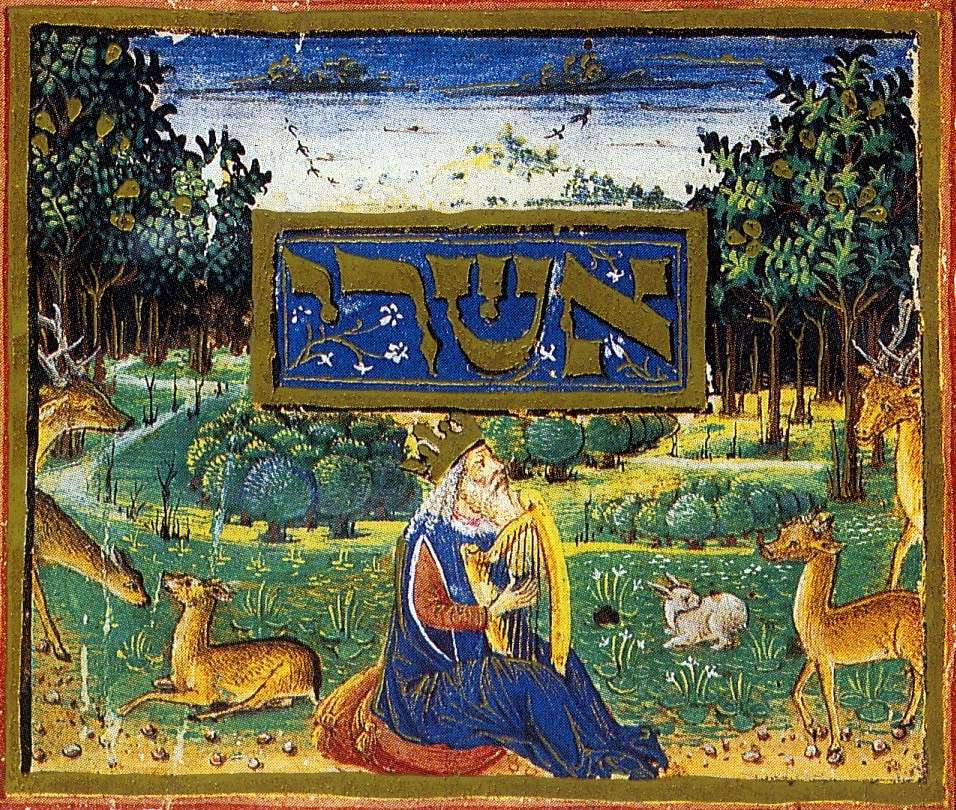 In spite of the enforced segregation of the Jews, exchanges with the Gentile world were frequent, continuous, and bilateral. The synagogue gave to the Early Christian church some of its ancient melodies; the recitation formula of the psalm B'tset Yisrael ("When Israel went forth out of Egypt"), for example, survives in the Gregorian chant repertoire as the tonus peregrinus . It is thanks to a Christian that we have the oldest surviving example of written-down Jewish music, the beautiful Eulogy of Moses. It was composed by Giovanni, a monk, who, converting to Judaism, took the name Obadiah. Since he was a child of the Mediterranean world -- Sicily, then Egypt -- we have imagined accompaniments of near-Eastern kind to this sketchily notated melody.

Jewish minstrels were apparently not uncommon during the Middle Ages, though only a few have left traces of their activities. Two songs are attributed in French manuscripts to a mysterious "Matthew the Jew". The conventions of courtly love -- an adoring trouvère, and his distant, cruel Lady -- are deepened and darkened in Par grant franchise. Here, the poet's wounds are real, his parting envoi nearly a curse. Like Matthew, the minnesinger Sueskint suffered from his break with the Jewish community. In Wa Heb'uf, he vows to forsake courtly life and to return to the Jewish fold..

If the Jewish musicians felt themselves to be different, their ways of being were nonetheless infused and informed by the majority cultures in which they evolved. The Judaeo-Spanish melodies we perform were collected only a few years ago in Morocco and the Balkans; there, remnants of the Jewish comunity exiled from Spain in the fifteenth century clung tenaciously to their Spanish heritage. We have dared to juxtapose these songs and prayers with the Christian music of medieval Spain. The scale patterns, the melodic profiles, and the spiritual intensity of these two repertoires allow them to be heard together in neighborly good concord, just as Jews, Christians, and Moslems managed to exist together for many centuries in the Iberian peninsula. Though separate in many ways, the different peoples who created Spanish music were all contributing, consciously or not, to the making of some uniquely precious musical dialects. From diversity came harmony and wholeness, as they will come again someday on our troubled planet, when the nations finally cease so furiously to rage.


These program notes are © by Joel Cohen.
bostoncamerata.com 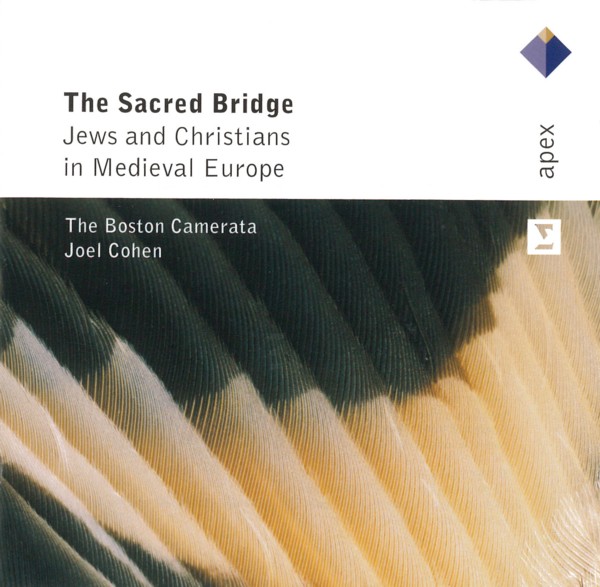