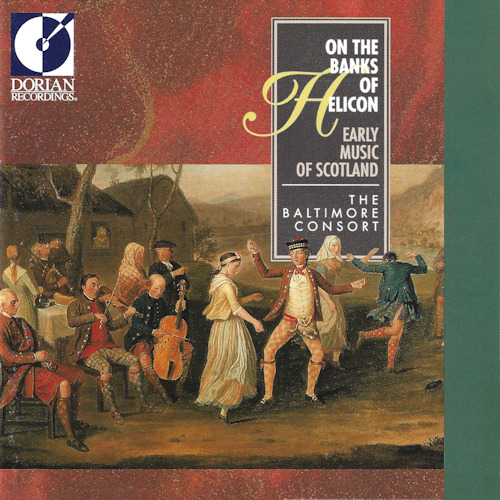 Most of the Scottish music on this disc is over 400 years old, and yet it strikes our ears as contemporary in its freshness and originality. The Scots composers, whose names are mostly lost or at least separated from their original compositions, had a gift for expressive melody. Although French and English influence was strong in courtly circles, the imported genres of dance, chanson and accompanied song were transformed into a product uniquely Scottish.

In the 16th century, the court of Scotland, like its counterparts to the south, fostered the sophisticated musical arts ("music fyne") of church polyphony, courtly song and instrumental consort music. All Scottish rulers in that turbulent century loved music and poetry, but the political and religious pressures that determined their marriages and brought so much pain into their lives also affected the course of Scottish musical history. James V's French brides (the first died a year after arriving in 1537) were responsible for a significant importation of French music. The Scottish Reformation (1560), with its espousal of simple psalm-singing in the language of the congregation, eventually brought to an end the institutional patronage of elaborate polyphonic Latin church music. There were, however, secular musicians and poets attached to Mary, Queen of Scots, and to her son, James VI, who produced simpler songs and instrumental consorts of great beauty. James Lauder, whose Paven dedicated to the Lord of March (1584) is one of the few datable and attributable works of this period, is thought to have been a player of viols and virginals. As James VI grew old enough to assume independence, he gathered about him a group of poets led by Alexander Montgomerie (author of "Lyk as the dum solsequium" and "Come my children dere"). Court patronage was lost altogether in Scotland when James moved south to succeed the childless Elizabeth I as King of England.

It is in the traditional native airs that we hear the typically Scottish melodic features of the gapped scale and the rhythmic figure known as the "Scots snap." As early as the 17th century, aristocrats such as John Skenes of Hallyards had set about collecting and preserving these haunting melodies. English art song had begun to filter into Scotland, but the most significant development was the Scots' intensified interest in collecting and writing down their own traditional music, including bagpipe and fiddle tunes. "The flowres of the forrest", perhaps the most famous of the Skene MS tunes in the present program, refers to the tragic Battle of Flodden Field (1513), in which the "flower of Scottish manhood" was cut down (including the young king, James IV).

Our disc presents a potpourri of "music fyne", traditional native airs, and English imitations of the latter. The courtly "music fyne" reveals the stylistic ties between the Scottish and the French repertories: "Support your servand" is a translation of Clément Marot's "Secourez-moy, madame, par amours". "Our Father God celestial" is a metrical paraphrase of The Lord's Prayer sung to the music of a four-part chanson, "Je suis desheritée", by Pierre Cadéac. "O lustie May" is set to a French-style galliard. The boisterous late-15th-century "My heartly service" has been described as a French "fricassée" (a jumble of ingredients) above an ostinato bass. In this amusing piece, originally associated with an ancient ceremony in which herdsmen dressed as beasts pulled a plow to mark the beginning of the plowing year, two voices call out the names of oxen as well as their fellow herdsmen, and then enumerate the parts of a plow.

Beginning early in the 17th century, the English developed a taste for "Northern tunes". "The Scots March" is one of many such titles in the virginal manuscripts. "Joy to the person" found its way into English broadsides. The Playfords, especially, began to include music "after the Scotch humour" in their publications. "Scotch Cap" is one of several Scots-style tunes in The English Dancing Master (1651). By the end of the century, famous composers such as Purcell (in his "Birthday Ode for Queen Mary") and Nicola Matteis ("Ground after a Scotch Humor") had tried their hand at arranging Scottish melodies, and the Playfords had published A Collection of Original Scotch Tunes: Full of Highland Humours for the Violin (1700). Thomas D'Urfey's Wit and Mirth: or Pills to Purge Melancholy (1st edition, 1698) was the first English publication to contain both words and music of Scots songs (some written by Englishmen, others originating in Scotland). "Jockey loves his Moggy dearly" is typical of the English forays into Scots dialect.

The instruments used on this recording are similar to those known to have been popular at the Scottish court. An inventory of Holyrood House (the court residence) shows that the court owned a lute, a cittern, a bandora, and viols, the very instruments that form the core of The Baltimore Consort. To this group of soft instruments we have added flute and also a single-drone bagpipe of a type which was common throughout Europe for centuries.

The words of most songs here are in Scots, a dialect which was not only spoken, but flourished as a literary language in the 16th century. It is very close to English and can be understood by English-speaking people as long as a few specialized words are defined and conventions of spelling are understood.