VOLUME 1.   MUSIC OF THE MIDDLE AGES 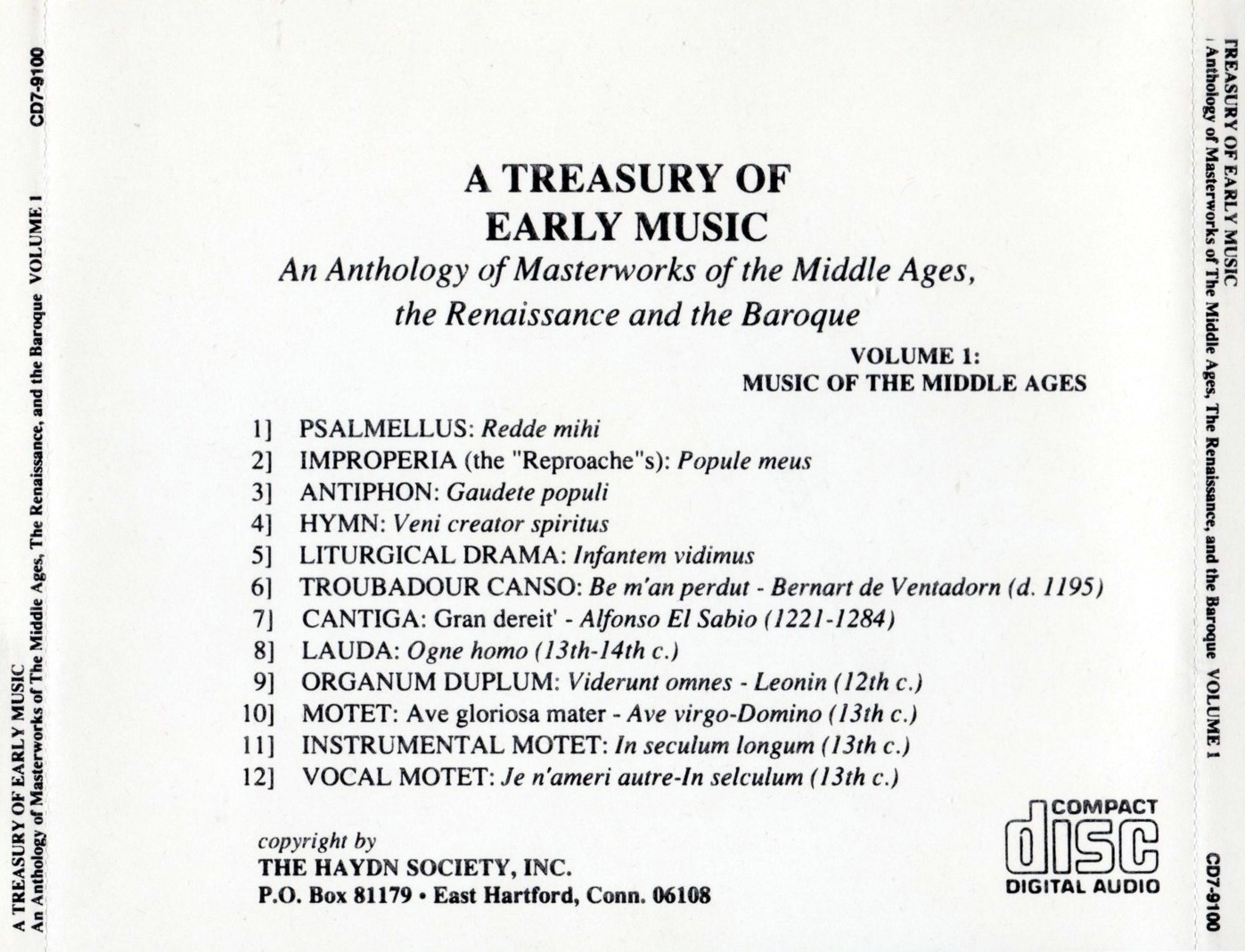 1. PSALMELLUS: Redde mihi, for the first Sunday in Quadragesima (Lent), of the Ambrosian Liturgy. This is the first of four examples of chants from the four great liturgies of early Christian times: Ambrosian, Gallican, Mozarabic, and Roman. The Psalmellus is the Ambrosian equivalent of the Roman Gradual; it comes between the Lesson and the Epistle. The highly florid melody of this example is characteristic of the Psalmellus style; som syllables are set tu very long melismas. The text of this Psalmellus us from Psalm 51 — the opening Response is verse 12, the following section (marked "Verse" is verse 1).
Source: London, British Museum, Antiphonarium Ambrosianum, Add. Ms. 34.209, fols. 167–168.


2. IMPROPERIA (the "Reproaches"): Popule meus, for Good Friday, of the Gallican liturgy. This is a very ancient chant, possibly of apostolic origin, which became part of the Gallican Mass in the 6th century, and was taken over into the Roman liturgy in the 12th century. The text is in both Greek and Latin, a vestige of a once widespread usage during important feasts. The example is the first of two large sections of the Improperia, and consists of three reproaches by the Saviour, each followed by the refrain "Agios o Theos (O Holy God) ... have mercy upon us".
Source: Liber usualis, p.704, Tournai, 1950.


3. ANTIPHON: Gaudete populi, for Easter, of the Mozarabic liturgy. The Mozarabic rite of Spain was supressed in the 11th century in favor of the Roman, but it is still celebrated in Toledo. Its chant was written in a notation that so far has remained undeciphered, but Spanish scholars have been able to restore some of the melodies, such as this example, which is for the Easter Communion. The text is a paraphrase of the Resurrection scene as related in the las three gospels.
Source: Dom G. Prado, O.S.B., “Mozarabic Melodies”, Speculum, 1928, p. 218.


4. HYMN: Veni creator spiritus, for Pentecost, of the Roman liturgy. This, the most famous of all Latin hymns, was written by Hrabanus Maurus, Archbishop of Mainz, in the 9th century; the melody is believed to be from a much earlier period. In the Octave of Pentecost, at Second Vespers, it follows the reading of the scriptural account of the descent of the Holy Ghost. The hymn has always been associated with ocassions of special significance.
Source: Liber usualis, p. 885, Tournai, 1950.


5. LITURGICAL DRAMA: Infantem vidimus. Dramatic presentations of the Christmas and Easter stories, as well as other stories from the Old and New Testaments, were common in the church from the 10th to the 13th century. Their texts were in Latin, and they were set to music similar in style to syllabic plainchant. This one, for Christmas, portrays in dialogue the Magi bearing gifts, Herod's command for the slaughter of the innocents, and includes a Hymn of the Prophets, foretelling the rule fo the new King.
Source: Einsiedeln, Stiftsbibliothek, No. 367.


6. TROUBADOUR CANSO: Be m'an perdut — Bernart de Ventadorn (d. 1195). This example, and the two following it, are characteristic secular monophonoic pieces of the 12th and 13th  centuries. No. 6 is a love-song by one of the greatest medieval lyricists, in the Provençal language of Southern France. The melody is in the form of the rounded chanson (A, A, B — with a return of the final phrase at the end of B). The melody is repeated strophically for each six verses (only two of which are sung in the recording), and the whole ends with an envoi, or conluding section, addresssed to the person for whom the song is written.
Source: Milan manuscript known as Chansonnier G, fol. 14.  (C. Appel, Bernart von Ventadorn, Halle, 1915).


7. CANTIGA: Gran dereit' — Alfonso el Sabio (1221-1284). The fabled shrine of Santiago de Compostella [sic] is the source of this song, which is one of a collection of over 400 cantigas compiled by King Alfonso X of Spain, who himself composed many of them, including this one. The cantigas relate various miracles of the Virgin Mary. This one tells how she rewarded a monk who had dedicated certain Psalms to her, each of which began with one of the five lettes of her name (Maria). Of the six verses comprising the cantiga, nos. 1, 2, and 6 are recorded.
Source: El Escorial, T.j.I, fol. 32. Modern edition: H. Anglès, ed., La musica de las Cantigas de Santa Maria del Rey Alfonso el Sabio, II, Cantiga LVI, p. 64.


8. LAUDA: Ogne homo (13th-14th c.). The religious revivals of Europe in Europe in the 13th century inspired many songs of popular religious fervor. Among the various national songs of this kind, the Italian lauda is especially significant for having awakened a native lyricism, and in starting a special Italian genre which led ultimately towar the oratorio. According to its notation, this piece seems almost certainly to be in duple meter, a noteworthy faeture for its time, and one whiche reflects both its popular origin and its national character. Its subject is the praise of the cross.
Source: Biblioteca Nazionale Centrale of Florence, Ms. Magliabechiano II, I, 122, fols. 25 and 25.


9. ORGANUM DUPLUM: Viderunt omnes — Leonin (12th c.). This example, and the three following it, illustrate various phases of the 12th and 13th century polyphony. Viderunt is a typical organum duplum, consisting of a Gregorian cantus firmus in notes of seemingly indefinite length (excepts for a measured section towards the end), above which there has been added a highly melismatic part, whose original notation appears to indicate a free rhythm in certain passages, but a strict modal rhythm in others. Organum duplum is the oldets style of the school of polyphonic composition which flourished in Paris in the 12th and 13th centuries.
Source: Wolfenbüttel 677, fol. 21. Facsimile edition of this manuscript is J. Baxter, An Early St. Andrews Music Manuscript, London, 1931.


10. MOTET: Ave gloriosa mater—Ave virgo—Domino (13th c.). This composition represents a stage in the development of the motet (the most important polyphonic style of the 13th century) in which three different levels of rhythmical activity are carried on among the three voices: a simple repeated rythmic pattern in the tenor, a more varied movement in the middle voice, and a still livelier movement in the top voices. The use of related but different texts in the two upper voices is characteristic. The tenor cantus firmus is a rhythmicized plainchant segment taken from the salutation Benedicamus Domino.
Source: Bamberg, Staatsbibliothek, Ed. IV 6, fol. I.


11. INSTRUMENTAL MOTET: In seculum longum (13th c.). This example is in three parts, and, like nos. 9 and 10, has a rhythmicized segment of plainchant as a tenor (in this case, from the Gradual Haec dies). The upper parts make consistent use of the device of "hocket" — i.e., the breaking up a melody into single notes o very short figures, performed in quick alternation between two parts. The tenor melody comes to an end halfway through the piece, and is then repeated, but begins on a different part of the repeated rhythmical pattern.
Source: Bamberg, Staatsbibliothek


12. VOCAL MOTET: Je n'amerai autre—In seculum (13th c.). This composition is identical with no. 11 except that a fourth voice, with a secular text, has been added above it. The added part differs from the character of the original lower voices not only in having words, bul also in its melodic flow and its variety and smoothness and rhythm, as opposed to the often syncopates inner voices. Examples 11 and 12 illustrate the medieval technique of composing by "layers" of melodic lines.
Sources: Bamberg, Stiftsbibliothek, Ed. IV 6, fol. 63v. | Montpellier, Fac. des Médecins H 196, fol. 1v. 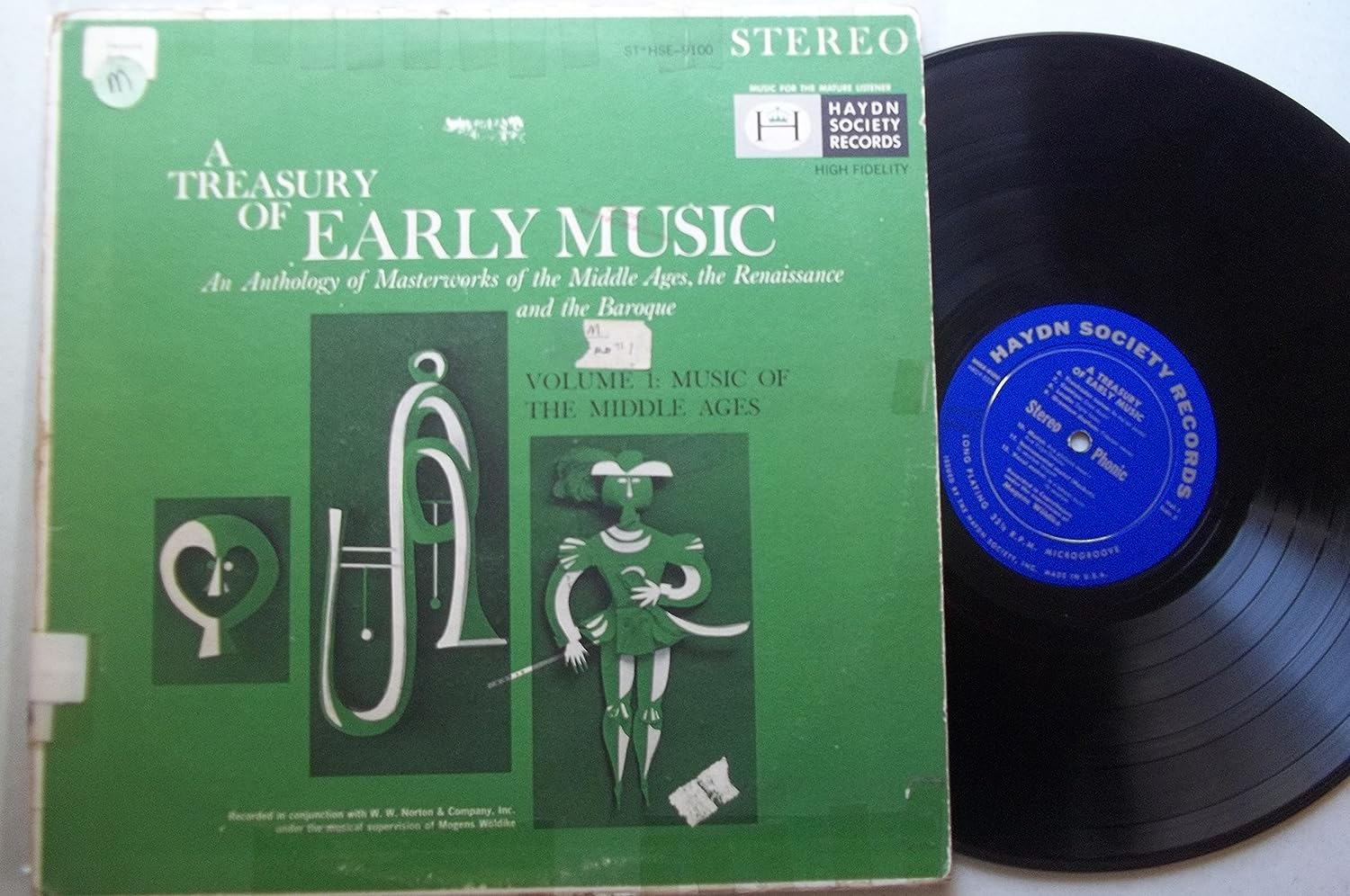