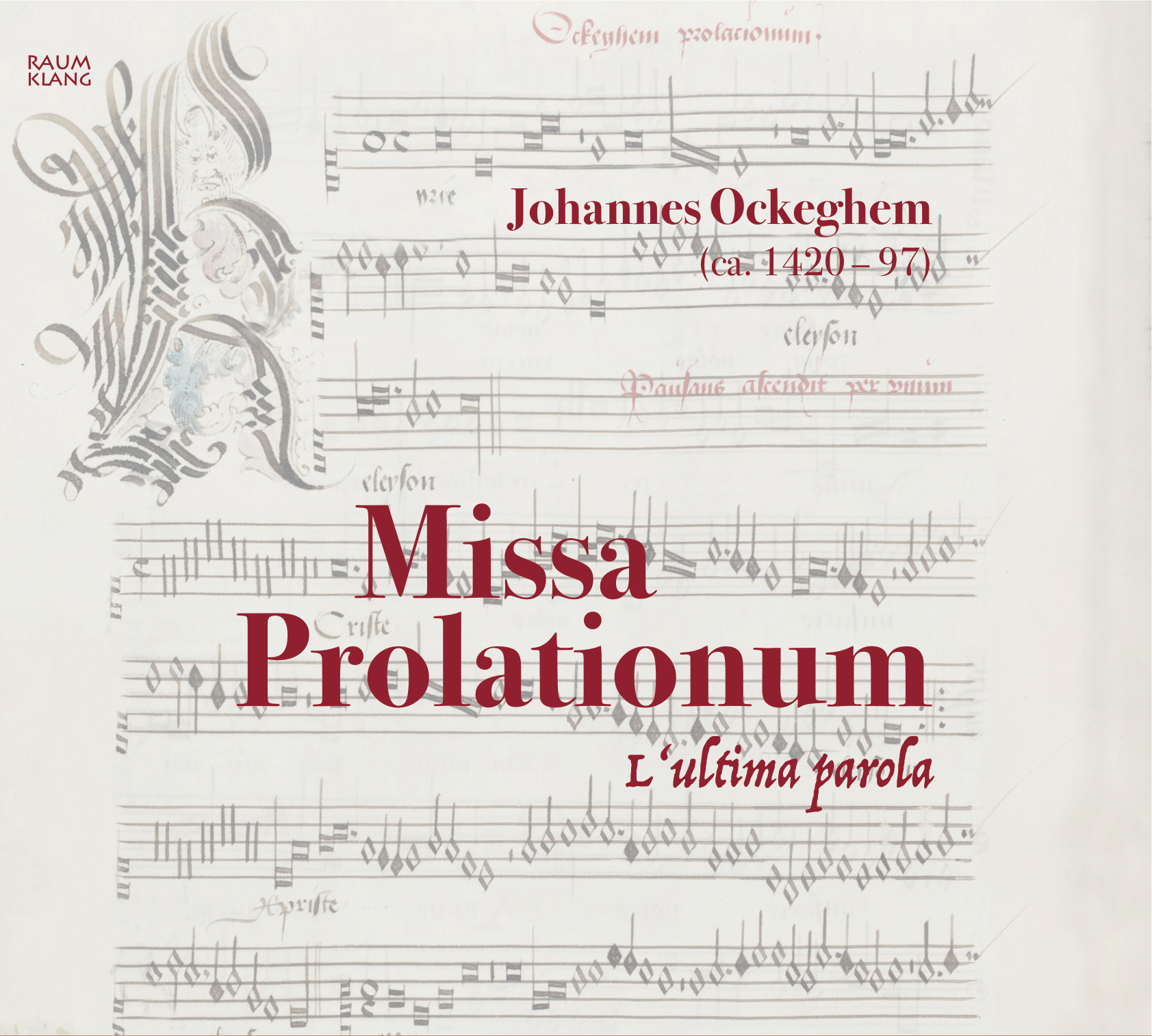 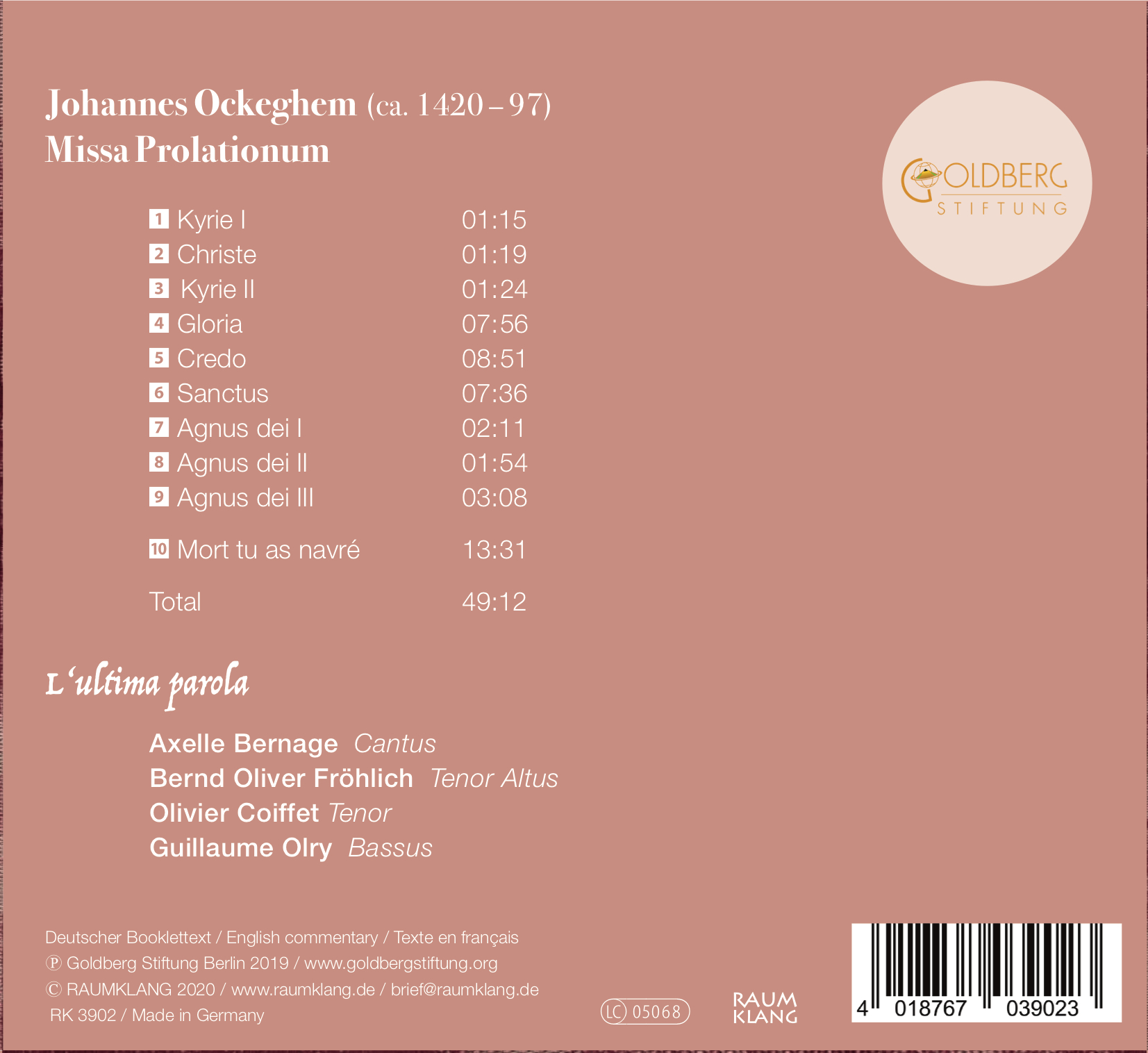 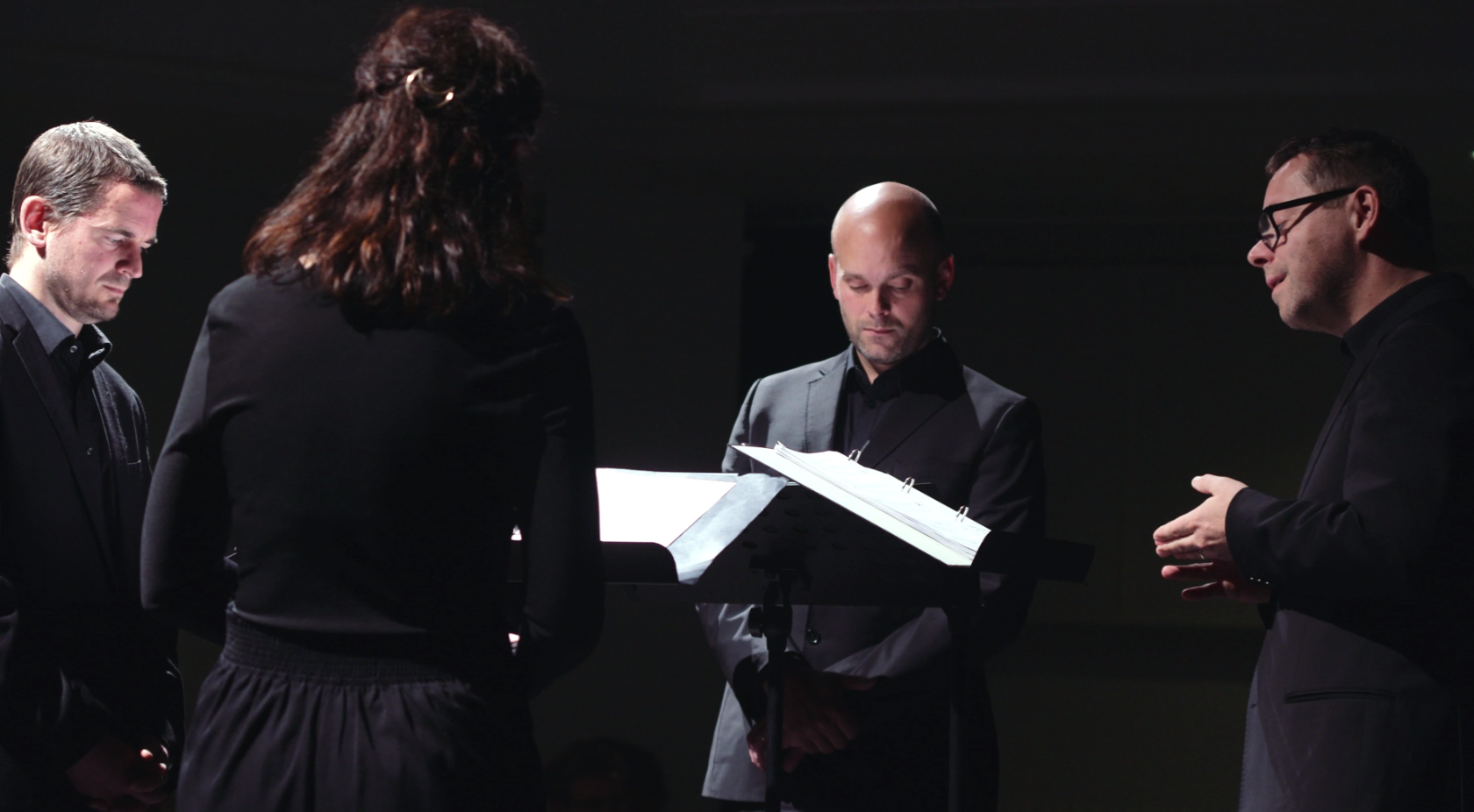 
And it's not as long as many releases in this field, but the new Ockeghem album by the new vocal quartet "L'ultima parola" made an instant impression: This is just a great recording of great music & was promptly added to my personal list.
(There's been a delay in writing this discussion only because I was waiting for the physical CD to arrive from Germany, so that I could read the booklet... which doesn't really discuss the performance much anyway. Actually, the essay on Ockeghem sounds similar to things I was writing in the 1990s, so that's a little eerie....)
Obviously I hope this group continues to record more music from the 15th century (as appears to be their focus), and I mostly have raves. If I'm to be critical, as noted in the linked discussion, having a woman sing the top line isn't historical, but everything works so well here, it doesn't seem like an issue. What else? I think my biggest gripe is actually the way the booklet falls right out of the digipak... this is something we can't get right in 2021? (Packaging generally remains a disaster in all areas of life, but I digress....)
There's also an issue of interpretive slowness, which suggests clichés of respect, but these four singers hold their tone so well, there aren't musical issues with it.... Their clarity is great in general. And the polish is amazing for a first album! This is a great example of 15th century vocal virtuosity in general, not to mention such great music from a more technical perspective — and sung basically without compromises.

As far as Josquin anniversary releases, these are already in a lull it seems, but I certainly do expect (or hope for...) more at some point....

In some ways, I don't have a lot to say about this release: The music is centered on one of the long acknowledged great works of its era, and the performance sets new standards for clarity in all areas. Maybe this is the start of a new era of recordings of music from this period, where everything just seems right? (I don't want to be unfair to previous musicians, but there's been a lot of progress on performing this music. And it doesn't seem so long ago that I was forced — well, that or nothing! — to hail various highly compromised interpretations....)

Regarding the music, entirely in canon, the Missa Prolationum is clearly one of Ockeghem's central mass cycles. And although it might seem formalistic, it's the supple writing of the two musical lines (doubled differently by canons in each movement) that create its magic, as the affective (ritual) quality of the piece remains remarkably high — especially in this fine (& rather austere) reading. And Mort tu as navré is one of Ockeghem's great works as well, albeit already possessing other quality interpretations on record....

The Missa Prolationum has been recorded many times too, but this rendition definitely sets new standards. As noted, everything is very clear: Phrasing & diction are crisp, voices are audible individually but also add into a potent blend, tuning is precise & idiomatic, sonorities are pleasing.... Even the recorded sound quality is very clear (which I wouldn't normally emphasize, given that this is a 21st century recording, but as noted in these spaces of late, there still seem to be issues regarding how much resonance or direct presence to maintain, and getting the balance right has apparently proven tricky for some otherwise fine interpretations...). Moreover, the parts are apparently sung at written pitch (as hasn't been typical), and this improves the coherence of the music considerably. It's difficult music to sing, but instead of compromising via transposition, L'ultima parola went out there & did it. (What has taken so long to get to this result? Quite simply, it's the combination of building the historical-conceptual knowledge incrementally & also of training singers who can physically sing the music idiomatically! These two factors enrich each other, or else one might say, sometimes have to wait for the other to catch up....)

As far as criticisms? Compared to what's available, I don't find any compromises here, in terms of my own preferences. However, if I'm to mention possible issues, of course there's a woman singing (as one of the four, individual parts) — she sounds good, but it's not authentic (& pace the comments above, I'll underline that actually being able to sing the piece is an easy preference for me!). And then their pace is generally rather slow, especially in the memorial motet: I actually like it (& it's not easier), but prior studies have argued that going more slowly indicates a "reverential" approach to historical music that likewise isn't prompted by its era. (The performers don't address this in the program notes, so perhaps they have a tangible reason....)

A very easy album to recommend!