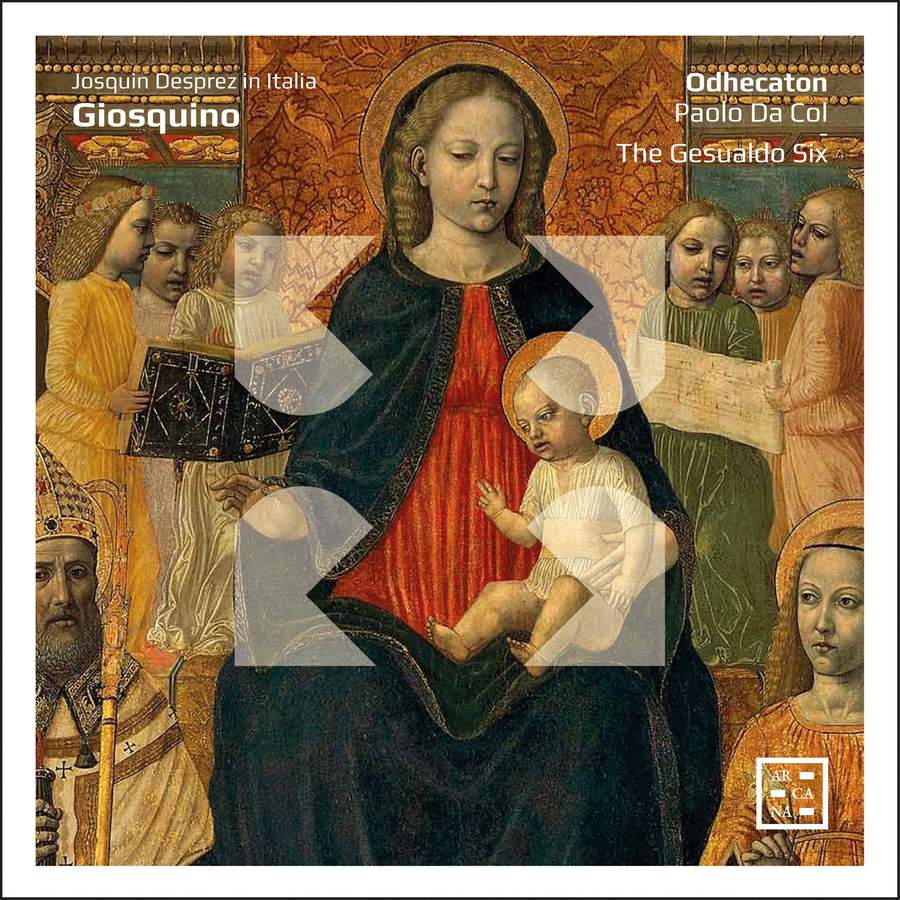 During the sixteenth century in Italy, the motto ‘i galli cantano’ (the Gauls are singing) circulated, acknowledging the supremacy of the Franco-Flemish ‘transalpine’ musicians who were summoned to the peninsula to serve princes and prelates in the techniques of composing and performing vocal polyphony. Josquin Desprez, ‘Giosquino’ to the Italians, was the emblematic figure: in addition to France, he was in the service of Cardinal Ascanio Sforza in both Milan and Rome (1484, 1498) and of the papal (1489-95) and Este chapels (1503-4). On the fifth centenary of the composer’s death (1521), the Odhecaton ensemble proposes to retrace Josquin’s Italian itinerary with the Missa Hercules dux Ferrariæ, composed for the Duke of Ferrara Ercole I d’Este, and a selection of motets commissioned by Italian patrons. The contribution of The Gesualdo Six in the more solemn pieces brings the vocal ensemble to twentytwo singers, a number that is close to the forces of the Rome and Ferrara chapels and yields new sonic results in our quest to recreate how polyphony sounded in the fifteenth and early sixteenth centuries.


And it seems that there will be another burst of Josquin releases later in the year (& perhaps more being made during the year?), the latest being that from Paolo Da Col & Odhecaton: Da Col hasn't recorded often, but his general confrontation with this material goes back at least to the 1990s, i.e. first (?) with the Gombert Coronation Mass program, including a Josquin motet, but also commencing the usual mood of solemnity & grandeur that animates Odhecaton interpretations. (And Da Col had already moved from more obscure labels onto Outhere by reissuing his big Compère production, likewise in the mode of spectacle....)

There's also the addition of other ensembles, both to boost the sound in a few moments, and to play a couple of short instrumental tracks. The "main" piece, though, is the Missa Hercules Dux Ferrariae — seemingly an extroverted, "natural" choice for Odhecaton — taken mostly by the 15-voice male choir, until adding additional groups for a massive & climactic ending. However, the decision to interpolate Tu solus into the mass doesn't work for me (& seems to be a bizarre choice), and with other, more detailed accounts available, the Odhecaton reading ends up seeming on the muddy side. There's still no "go to" reference for the motets, though, and so some of the large-ensemble offerings here immediately become among the best options: Both Praeter rerum seriem & O virgo prudentissima add voices (beyond the base 15), and while the promised potency of the former, opening the album, doesn't quite come to fruition for me, it sets a rumbling stage for those that follow, i.e. mostly motets associated with Ferrara. O virgo prudentissima is gorgeous (using the "big group" to fine effect...), and Inviolata, integra et casta is a potent reading as well — although the program notes say nothing about the (relatively unsophisticated) 12-part adaptation that concludes the program.

There's also an obvious comparison to be made with the Cantica Symphonia album, starting with its shared Italian orientation — where Odhecaton does focus much more on music actually by Josquin (while Maletto et al. largely dismissed that topic!) — but also including various performers in common (as well as with the new Zacara set). In that sense, the program makes more sense (& includes better music overall), although it's perhaps less lively per se. (And also per the Zacara comments, some of these Josquin pieces do suggest a "new kind of propaganda" too. Is that what formal innovation means?) In any case, while not as detailed as some productions, Odhecaton's Giosquino album ends up involving a strongly affective overall sweep, with various aspects of large-scale momentum handled with both grace & potency, including via the orchestration of the program as a whole.