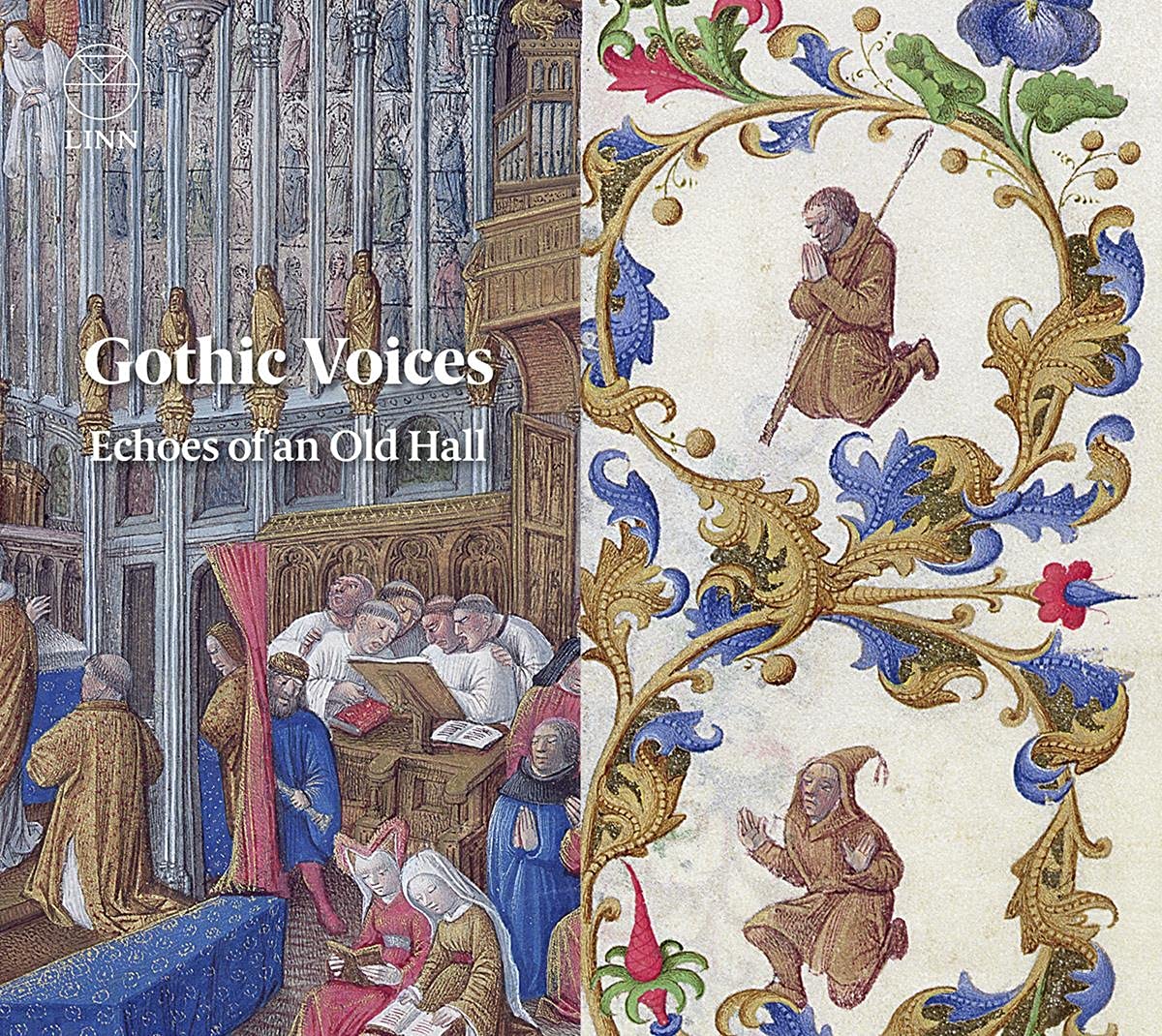 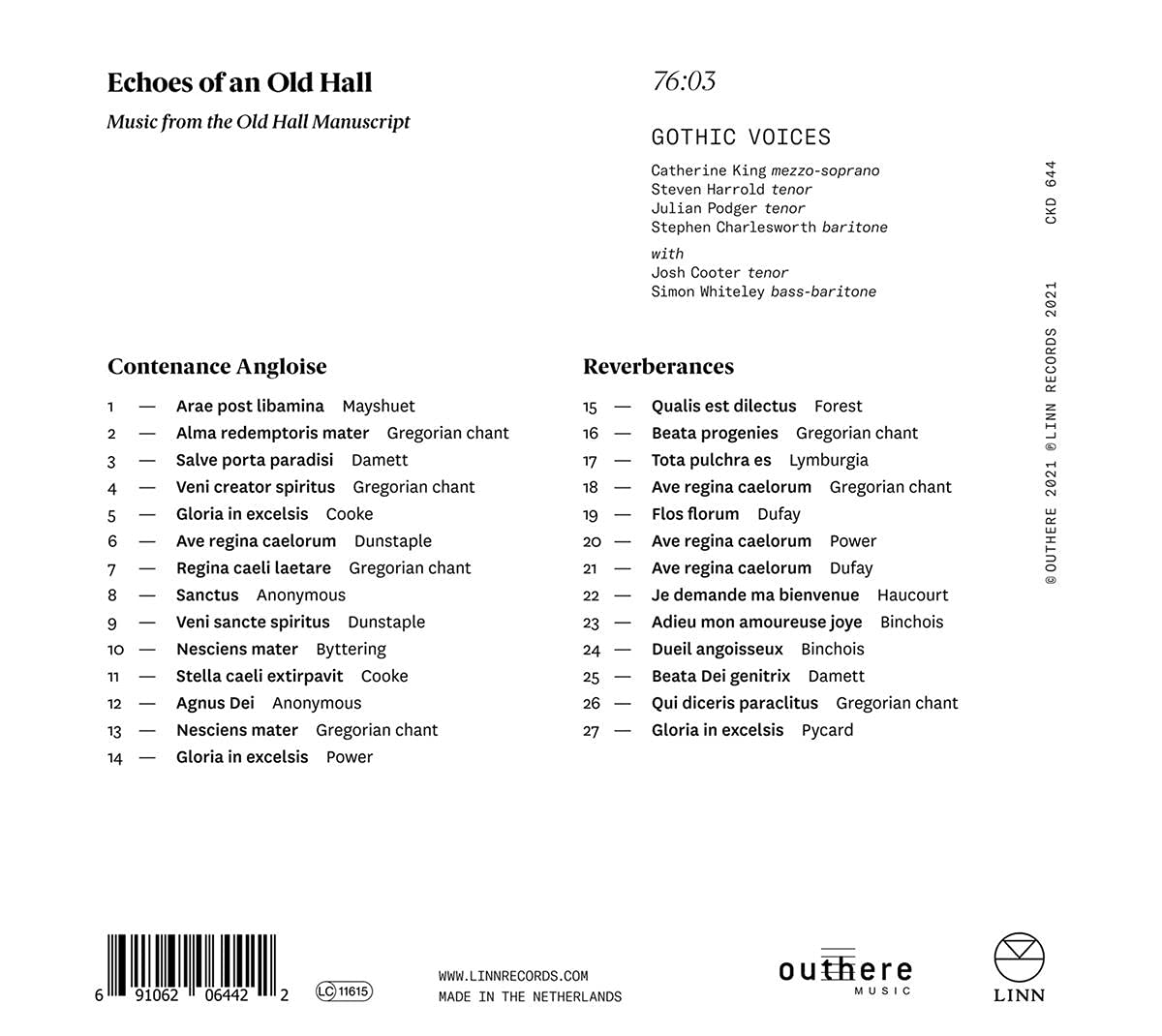 
Another ongoing (& seminal) medieval group is then Gothic Voices, and they've likewise undergone various changes, particularly with founder Christopher Page leaving the group. Those changes seem to be inaugurating a new era of fresh explorations for the current vocal quartet, though, as their latest album Echoes of an Old Hall comes to recall the excitement of some of their issues from decades past (i.e. especially as they were pioneering Pythagorean tuning).

Regular readers will know that I don't necessarily like these broader programs, and indeed the program extends beyond the Old Hall Manuscript into (later) continental influences, but the production is so immediately striking that I have to take notice. Regarding the history, it's also interesting that this latest album is back to an all-vocal presentation (supplemented by a couple of extra voices when needed), but of course I'd already admired their recent Dufay Spectacle, i.e. another mixed genre presentation, there with a variety of instrumental support.

That's also quite an extrovert album, and seems more like a (welcome) consolidation of style, while Echoes of an Old Hall is more about "new" explorations & refinements: There'd already been the Orlando Consort album (2017), and that includes some earlier (versus later) repertory in a larger program, but also illustrates a similar intricate variety. Gothic Voices might bring a little less pure precision, then, but I also start to feel more the "resonance" of the tuning, the basic machinic background of these little jewels.

In other words, they continue to take on the feeling of "rightness" & sparkle. Everything thus feels so sophisticated here, and generally well-articulated. (It's definitely worth contrasting the Dufay Ave regina celorum with that on the — also quite welcome — recent Diabolus in Musica album. The Gothic Voices rendition is far more intricate, bringing out all the lines, i.e. lets one hear Dufay's "smooth" style itself as a product of its isorhythmic heritage.... And Binchois is given some similar treatments, although not more compellingly than those of the recent Comet Musicke set, which is likewise grounded in a more medieval approach....)

The singers do end up a bit breathless at times, and I'm not sure if that's intentional excitement or remaining challenges to singing this music... probably (authentically) some of both, but they do build to some impressive climaxes at times. And I'm not sure why so many monophonic tracks were included (although it's still a long program, and actually I'm pretty sure they're there to break up the density...).

Oh, and the "studio FLAC" for this release was particularly enormous: It does sound great, and is apparently able to accommodate the second half of the program's (dubious, if you ask me) idea to interject some Old Hall material "from off stage...." Anyway, the album was added to my personal list, and I should probably note the previous Nowell synge we... here as well, since it involves some similar tracks (& since I'd ignored it previously as "just another Christmas album"). So having recaptured some of their prior excitement, what's next for Gothic Voices?

The punnish title here refers to the English Old Hall Manuscript as well as to music of the next generation (e.g. Dufay, Binchois...) influenced by this English musical activity. The former basically involved (in part, belatedly) taking up the continental Ars Nova style, leading to striking syntheses in that area — & in turn to continental syntheses reflecting English (discant) style. This music thus sits at a historical crossroads, as emphasized by the construction of the program in two (not strictly separated) halves.

So whereas I might (as usual) prefer a more concentrated program, e.g. featuring one of these aspects, or even more internal consistency regarding genre (as the second half, especially, involves various secular music as well...), this selection is ultimately prompted by the quality of the interpretation.

It seems that we are really in the "next generation" of medieval interpretations here — all vocal in this case, which is not how Gothic Voices had handled their recent Dufay album (but is obviously their legacy...) — with greater transparency & precision than most previous attempts. This music is really coming to "make sense" — as e.g. the big isorhythmic motet from Dunstaple comes off spectacularly... — especially for these transitional styles that seem to occupy a historical inflection point: In particular, the ubiquitous thirds are still tuned according to medieval priorities here, i.e. emphasizing fifths, rather than attempting to "anticipate" a tonal style.... E.g. Dufay's (hard won) "smooth" style thus comes to simmer with internal complexity.