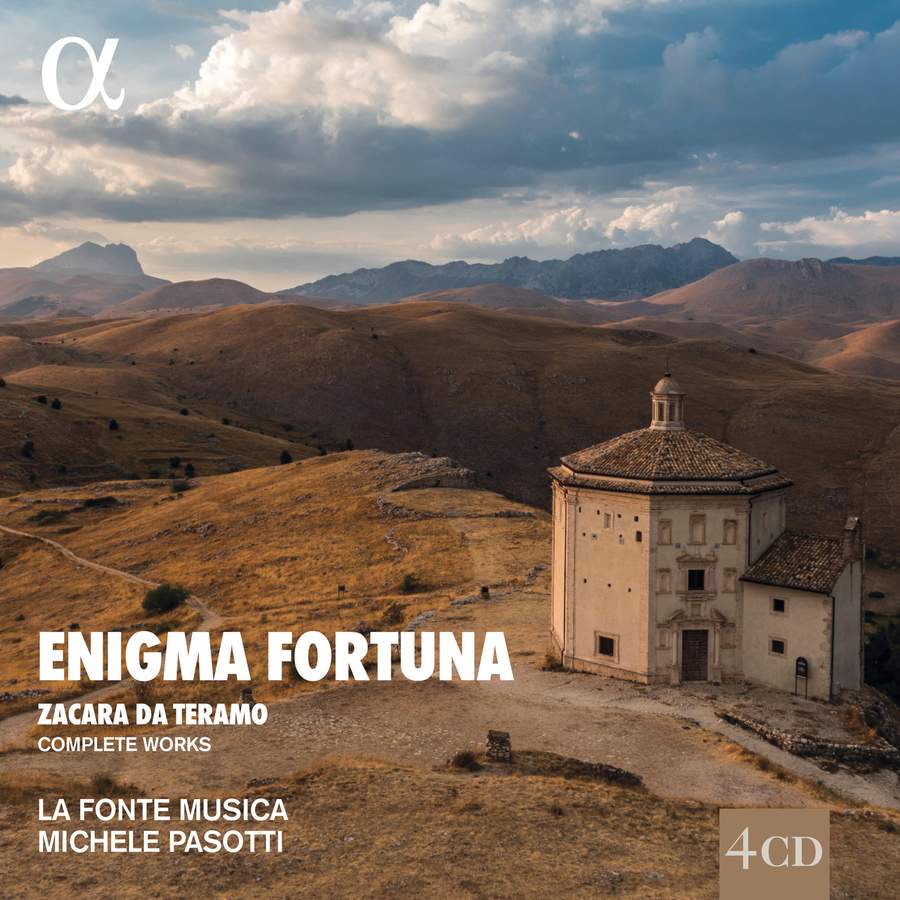 
In this recording entitled Enigma Fortuna, the ensemble La Fonte Musica, directed by Michele Pasotti, aims to shed light on the mysterious and eccentric personality of Antonio Zacara da Teramo (1355-1416). A contemporary of Boccaccio, Donatello and Brunelleschi, this composer from the Abruzzi region could almost be likened to a sort of musical Hieronymus Bosch, for the texts he set to music conjure up a ‘topsy-turvy universe’ where the obscene, the imaginary and the grotesque go hand in hand. In his ballata Amor ne tossa he writes ‘Let him understand me who can, for I understand myself’, foreshadowing the proud egotism of the Romantic artists who were to come 400 years after him. With this four-CD set presenting the world premiere of Zacara’s complete works, La Fonte Musica offers us an initial approach to understanding his music. And thereby, through the timeless character of art, to understanding a so-called ‘renascent’ era that seems as ‘topsy-turvy’ as our own.


Antonio "Zacara" da Teramo was a composer I'd noticed in anthologies — Ars Subtilior anthologies, that is, for some elaborate songs. (I tend to think of his music as part of the broad Ars Subtilior, but I guess some people would prefer to draw stronger stylistic distinctions, in which case, much of his music is actually outside that particular style.) And his songs tended to be particularly elaborate, including a wealth of both contemporary & historical references as well.

So in that sense, his music almost seemed like a curiosity, although I definitely enjoyed the previous Zacara secular album by "Currentes" (a Northern group). But I definitely didn't know what to make of earlier dedicated albums either, i.e. those by Micrologus (a group I've particularly appreciated in general...), and before that, the overlapping Sine Nomine ensemble: Those albums felt over-orchestrated to me, as if the performers had added a healthy dose of Baroque sensibility. I guess I just couldn't believe my ears when it came to those albums, burgeoning with ideas & sonic variety.

But now with the new complete set from Le Fonte Musica, I'm realizing that those weren't performer indulgences so much as they were direct attempts to render Zacara's spectacular & rhetorical music. And now the 4CD set makes a strong case for him as the greatest composer of his generation.... It's a great production, first of all, including a handful of essays & all the lyrics, reconstructing some of the songs (including via spectral analysis of parchment...), and articulated (musically) with remarkable clarity.

Indeed, not unlike my reaction to those earlier Zacara productions (of 20 years ago & more...), I didn't want to believe my ears when it came to the opening Mass movements. And it took me a while to feel as though I was really entering Zacara's musical world, but at that point, the clear diction & studious attention to differing emotional resonance in the various pieces came to seem like a real asset. (One thing about the production, though, is there's no discussion of performance choices in individual works, i.e. why some use instrumental support, what instruments, etc. One goal appears to have been variety, but it's the starkest a capella pieces, one voice to a part, that prove to me that various ideas on space, register & even "orchestration" are embedded in the scores themselves.)

The music, then, generally involves an incredible sense of space, as well as sudden stops & changes in direction, the latter heralding the later Renaissance madrigal. At other times, there's a strong sense of declamation — & particularly in the Mass movements, this recalls for me the development of a "declamatory" performance style for Machaut's Gloria & Credo (these long texts presenting different issues than the shorter Mass texts...). So while I went into listening to this project mostly interested in Zacara's secular songs, I also soon began to hear him as — in fact — the most impressive elaborator not only of Machaut's embryonic mass movements style(s), but of the sometimes-bizarre Avignon Mass repertory. That arose from the Papal Court there, and Zacara was intricately involved with Italian politics around the Papacy, so the notion that he was addressing this tradition directly is easy to accept. Indeed, a piece by Zacara is found in e.g. the English Old Hall Manuscript, and the sort of pointillistic styles he (sometimes) constructs suggest parallels with e.g. the mysterious Pycard & other layers of Old Hall, i.e. the last elaborations of the Ars Nova per se.

In his Mass movements, Zacara also clearly influences Ciconia — & while I certainly value many of the latter's songs & motets, Zacara is the master here: Ciconia left the smaller output as well, his greatest songs taking on what could be characterized as a more interiorized "Northern" style around flowing lines.... (The "Northern" album of Zacara on Lawo thus projects a more similar style to Ciconia.) Surely Ciconia has been prioritized, then, because of his greater similarity to later music, but also due to the sheer difficulty of Zacara.... (Tangentially, these Mass movements from Zacara have also made me more eager for a complete Matteo da Perugia: I've particularly enjoyed the production from Memelsdorff in the 90s....)

What Zacara accomplishes in this repertory is then not only integrating a wealth of contrapuntal invention & allusion (into individual, coherent pieces...), but within the sort of "pointillistic" style, a conjuring of space per se: One might even suggest that Zacara's music accommodates a feel for silence (& as I'd been auditioning Cage simultaneously, this feeling was unmistakable... contradictory as it may seem). Its various notions of register, balance, alternation, declamation, etc. also suggest a dazzling rhetorical practice — with the liner notes cryptically suggesting that Zacara was basically constructing a new kind of propaganda around the Papal intrigue. The music seems as though it might fall apart at any moment, yet it doesn't.... (There's a sort of choreography, one might say, that remains in place.)

And frankly, while I'm unsure what to make of some of Zacara's material, I feel as though I need to go the extra mile here for the performers, because they've brought a new level of facility to this project. This was obviously a very large project, and Zacara does come off as the greatest composer of his generation — so I'd have to say it's a rousing success! At the least, I have to say that he presents a distinct stylistic pole: When speaking of "an Italian style" against which the Northern developments transitioned European music beyond the Dufay era, Zacara most embodies (or at least most elaborates...) that style.

(And it's worth noting the more "inward" focus of later Protestant devotion, the Reformation seemingly being heralded almost in reverse here.... It's hard to suggest much "inwardness" especially to Zacara's sacred music! It's about public spectacle. But although he apparently invented parody, he only quotes himself...!) And I don't actually know what I'd think of Zacara as a person, especially his politics (& e.g. his view of money?), which seems rather confusing (at least at this distance), but he was clearly a musical (& literary) genius. The set was added to my personal list, with the highest rating, although I still need to update that discussion.


For the moment, the following remarks are merely adapted (lightly) from the previous entry for Zacara. More specific remarks will appear soon....

Antonio Zacara da Teramo is emerging as one of the best-known musical figures of the decades around 1400, after Ciconia and perhaps Matteo da Perugia. His music begins to project a distinct personality, and consists of works in a progression of styles, from simpler more typical Trecento music to some of the twistiest examples of Ars Subtilior style. [ Correction: Although we don't yet have a complete Perugia, Zacara's music exceeds at least Ciconia's in both volume & scope. And he more than "begins" to project a musical personality. ]

Zacara's music can be very intricate, with a wealth of allusion that is not fully understood today. That can make it seem a bit ponderous at times, particularly given the length of some of his pieces. He is, in some sense, the most Subtilior of Ars Subtilior composers â giving his output a particular fascination, as well as an opacity that is only partially being penetrated. [ Correction: And in some other sense, at least some musicologists don't consider much of his music to be Ars Subtilior style at all! ] This recording makes a dramatic (& now perhaps decisive) contribution to that project.