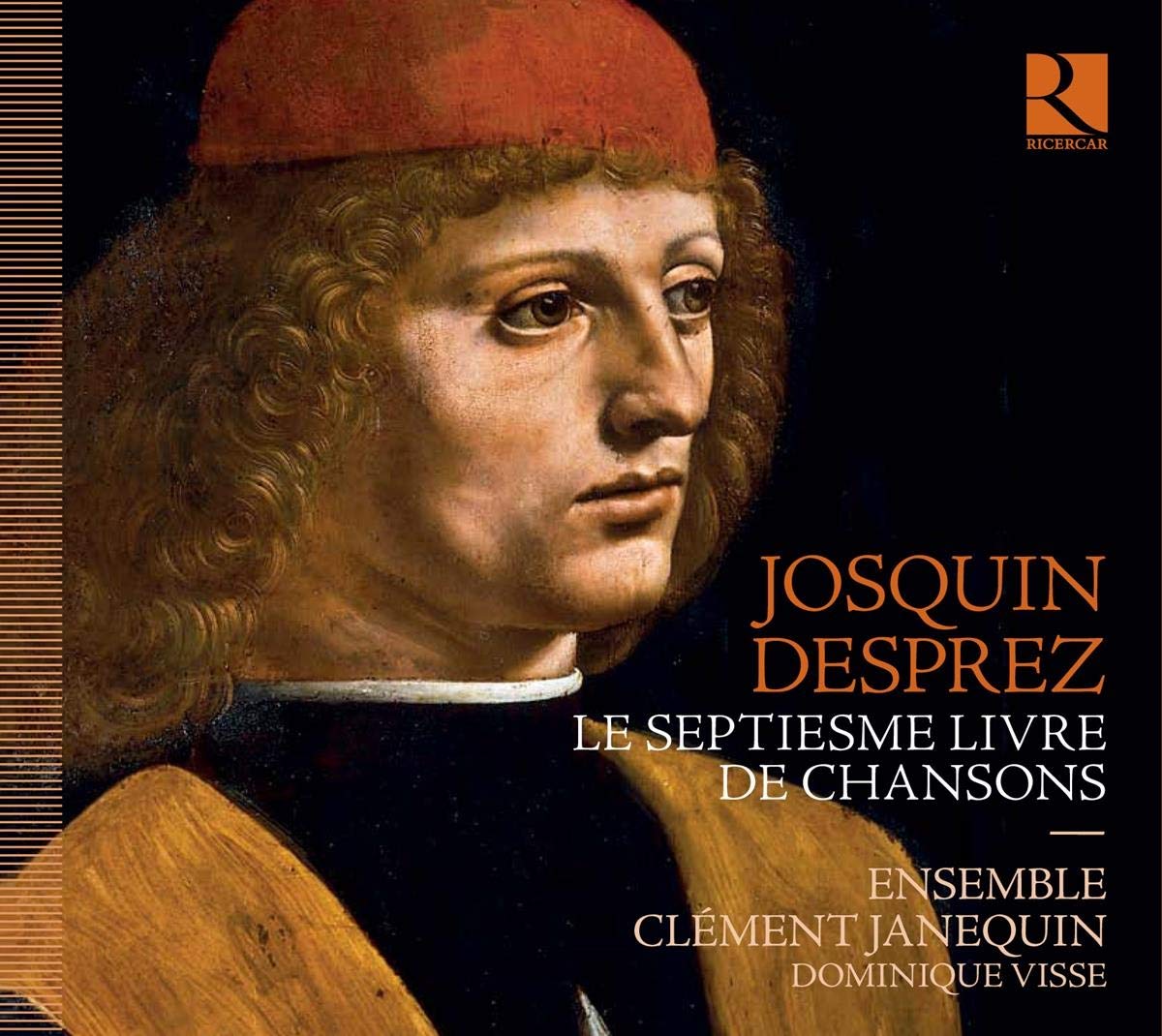 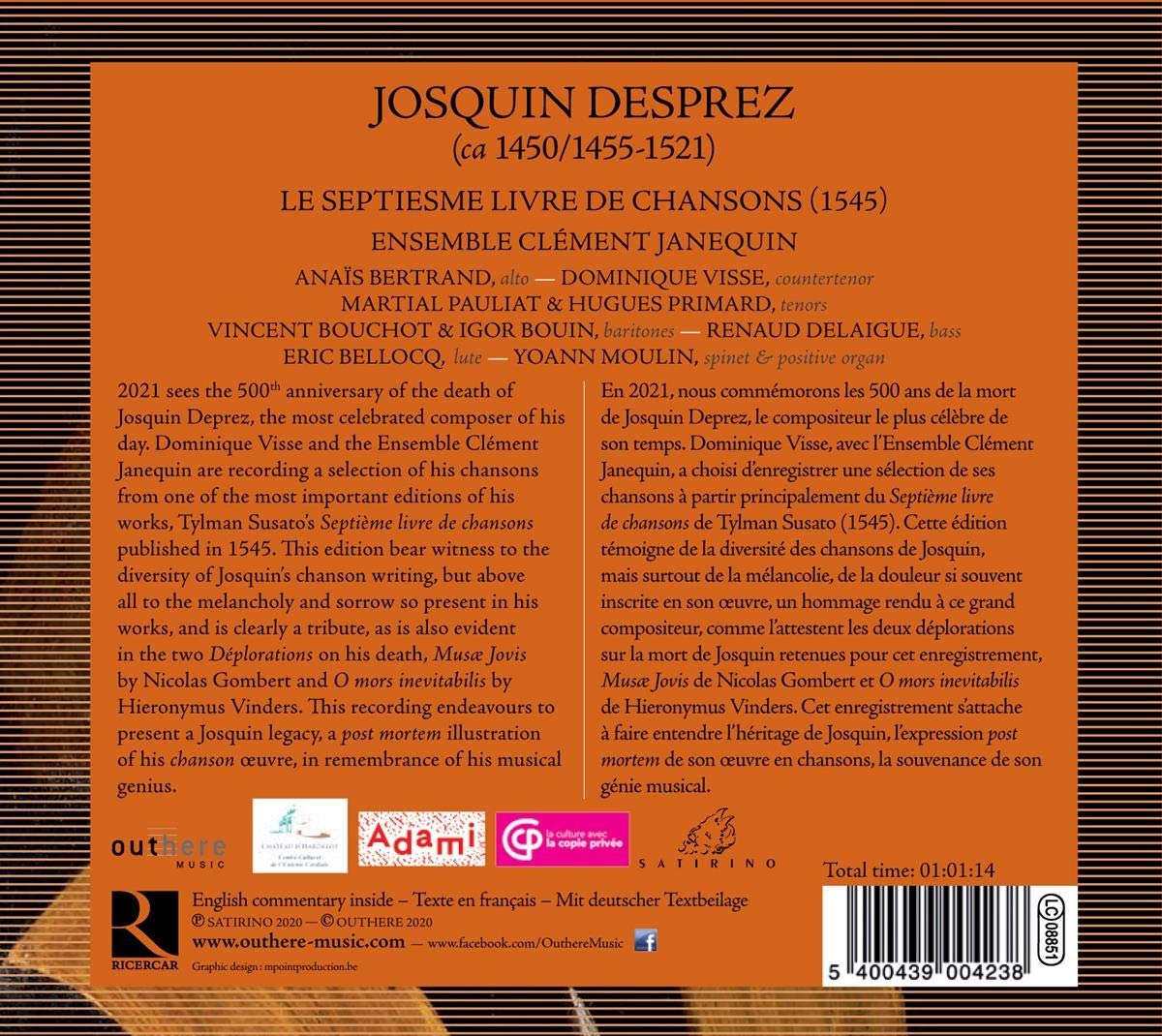 
2021 sees the 500th anniversary of the death of Josquin Des Pres, the most celebrated composer of his day. Dominique Visse and the Ensemble Clément Janequin are recording a selection of his chansons from one of the most important editions of his works, Tylman Susato’s Septiesme livre de Chansons published in 1545. This edition bear witness to the diversity of Josquin’s chanson writing, but above all to the melancholy and sorrow so present in his works, and is clearly a tribute, as is also evident in the two Déplorations on his death, Musæ Jovis by Nicolas Gombert and O mors inevitabilis by Hieronymus Vinders. This recording endeavours to present a Josquin legacy, a post mortem illustration of his chanson œuvre, in remembrance of his musical genius. It has also enabled Dominique Visse and the Ensemble Clément Janequin to express their profound musical passion for this major Renaissance composer who has accompanied them for more than 40 years.


And as Josquin anniversary releases accelerate (& hopefully we're still near the start of that process...), of course they're going to include interpretations by various (perhaps more famous) ensembles known more for later music, although in some cases e.g. a sixteenth century orientation will overlap with Josquin's later output. (And I should emphasize the degree to which Josquin's music straddles eras in a technical sense, not only in terms of music publishing & modernity broadly in that sense, but also according to ongoing transitions in tuning: It's important to note that Pythagorean tuning & mean-tone are almost opposites, meaning that there's considerable sonic tension between the two. Although most interpretations of Josquin, if considering period tunings at all, tend to dive straight into the amply documented sixteenth century style around various instrumental transcriptions & so also mean-tone temperaments, recall that various Josquin pieces do still cadence on open fifths....) And it already seems to be a trend to sidestep issues of authorship entirely, continuing to record some of the catchier "hits" that have subsequently been questioned:

Indeed all of these factors are wrapped into one package for Ensemble Clément Janequin's new Septiesme livre de chansons, based on Susato's 1545 publication. That's a retrospective collection devoted to Josquin a generation after his death, and tends to position the music in terms of the early madrigal, or especially the Parisian chanson. (It also sits contemporaneously to & is inclusive of various instrumental transcriptions for e.g. lute or keyboard... i.e. with their tuning implications.)

So to back up for a moment, it's probably accurate to suggest that I first started calling for new attention to recording Josquin's secular music once the prior Visse interpretation started seeming dated: This new album isn't dated in terms of the development of their own performance style, but it certainly does keep to a 1540s orientation — if not actually subsequent to that, given the heavily doubled (suggesting continuo?) bass parts, etc. (A specific orientation on the Susato book, having the benefit of more modern notation etc., is also reflected by e.g. Se congie prens — already almost a nine year-old recording, and likewise featuring quite a lot of organ, although from a group with a more medieval orientation in general....)

I guess what I'd really wanted, as I try to articulate that for myself now, is a program featuring Josquin's songs in the more classic style of Ockeghem & La Rue. Although Marc Lewon's program remains the most idiomatic & compelling for me overall (despite mixing in voices in kind of a jarring way that took a while to enjoy in a more relaxed setting...), that's also more of a nitty-gritty "instrumental variation" sort of perspective, such that the pure "courtly chanson" take still seems open to me.... (Maybe the main issue around such a project has really been that Josquin, absent the greater variety that ultimately seems to define his output, would suffer in comparison to e.g. Ockeghem & La Rue....)

ECJ also does without the viols of their first program (generally in favor of organ), using a larger variety of voices, particularly doubled in the lowest registers (& producing a stiff or heavy sound). And e.g. the spinet sounds jarring to me here, although actually it's pleasant enough. Anyway, the point seems to be a lot of pretty singing, sighing lines, big/clear harmonies, a kind of nostalgic drama.... In other words, it's an enjoyable update with some stylistic differences from their first album (released more than 30 years ago now!), but doesn't break new ground in period technique or articulation. I.e. I don't feel as though I've learned anything about Josquin or his music from this release, but some of the tunes & figures surely do resonate: What's perhaps most notable is how well his music continues to respond to these different settings & orientations (including already in the sixteenth century...).