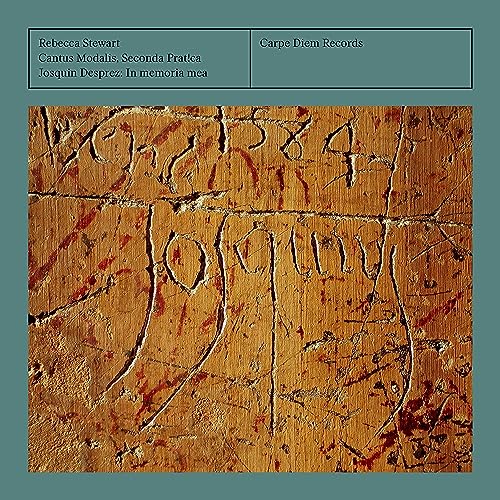 
Josquin Anniversary releases look to be appearing again for the fall season, including an anticipated album from Rebecca Stewart & company, In memoria mea. In fact, I'd noted this pending release in my discussion of Tetsuro Hanai & Ensemble Cappella here in June. And in most ways my response to In memoria mea (featuring the Missa Mater patris along with three Requiem-based memorial motets) is basically the same: I appreciate the singing technique, some of the slower passages (& textures) being quite appealing, but there's not much rhythmic drive in faster passages or (especially) climaxes. (I was also reminded that Stewart derives part of her ideas on vocal production technique from Indian classical dhrupad, and so, that makes me think of the building to quite intricate rhythms in that style, and indeed the way that Josquin's own music tends to build in rhythmic complexity through a movement or cycle.... But Stewart doesn't really do climaxes, it seems. She mostly keeps it mellow, although dynamics do surge e.g. for the end of the mass....)

I also appreciate the reconstruction of the possibly-Willaert motet, suggesting (once again) that there's more intriguing material from the period to hear.... But then what of vocal technique in Josquin? I'll reiterate my prior remarks that this seems like an era in transition (in this way as well...), and I'm very supportive of Stewart's ideas on overtones & timbre, but I guess where I really depart is on "drawing a line" stylistically, in terms of virtuosity, etc. Much of this music obviously involved virtuoso singers, at least for these prominent pieces — which were, of course, always exceptional (by definition). And why would e.g. a laud-motet have little rhythmic contour? It just doesn't make sense.

Anyway, Stewart — & this program was recorded just a few months ago, while featuring especially good sound — continues to discover & highlight aspects of the music, even as (per my previous comment) some is "left on the page." What I've also come to appreciate, pace e.g. my recent re-confrontation with Cage, is the "silence" that she finds within polyphony. I think that's an intriguing notion, and goes to a sort of comfort level as well..., again suggesting that (per dhrupad) perhaps these cycles (might) begin with much less rhythmic aggression (even as they develop it themselves along the way)? Anyway, I enjoyed the Requiem-based pieces (per Stewart's chant-inspired approach...) more than the mass cycle (overall), which can seem rather distended & incoherent (as constructed seemingly from a series of passages, particularly in the longer texts...).