The Liberation of the Gothic — Graindelavoix 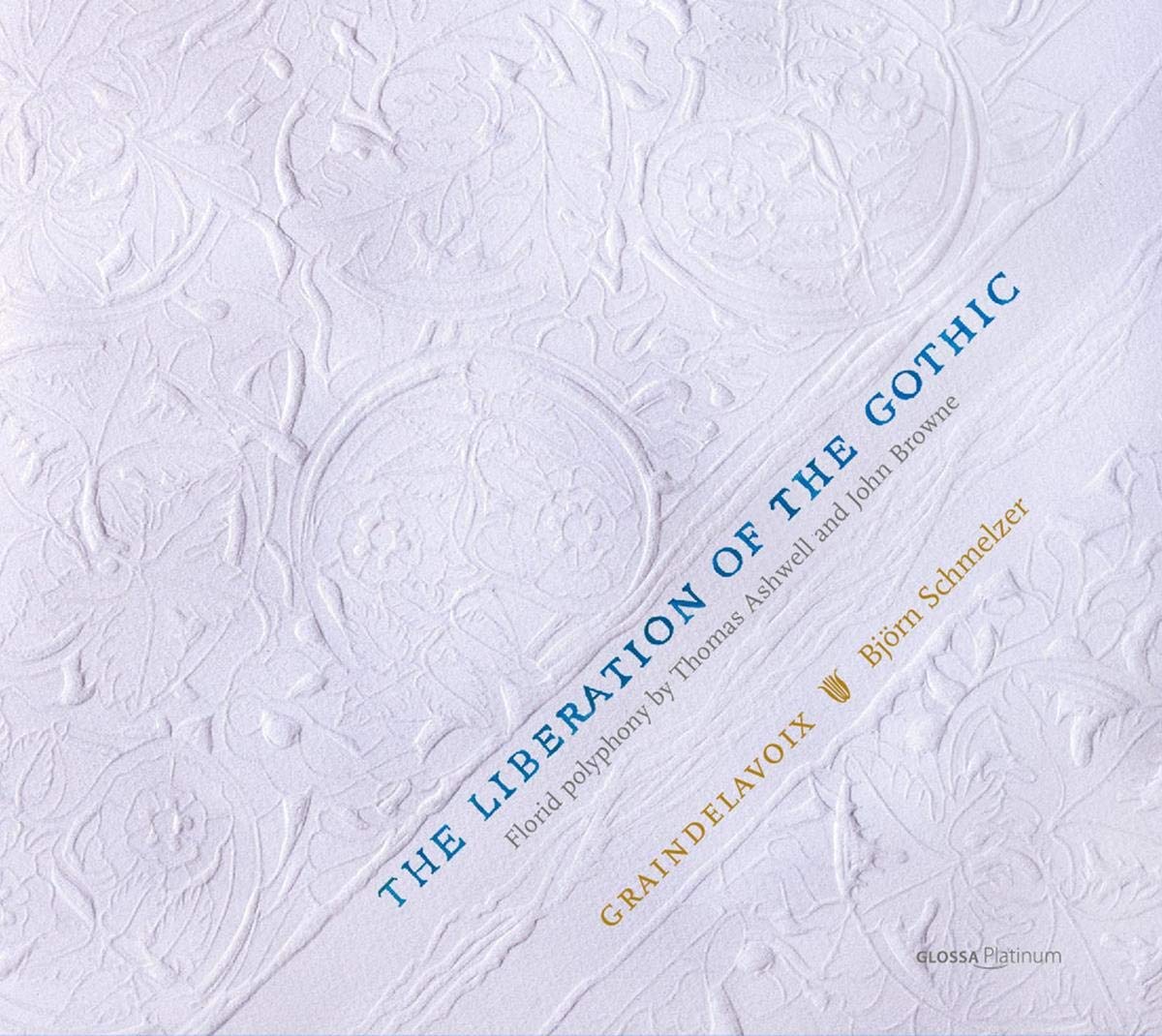 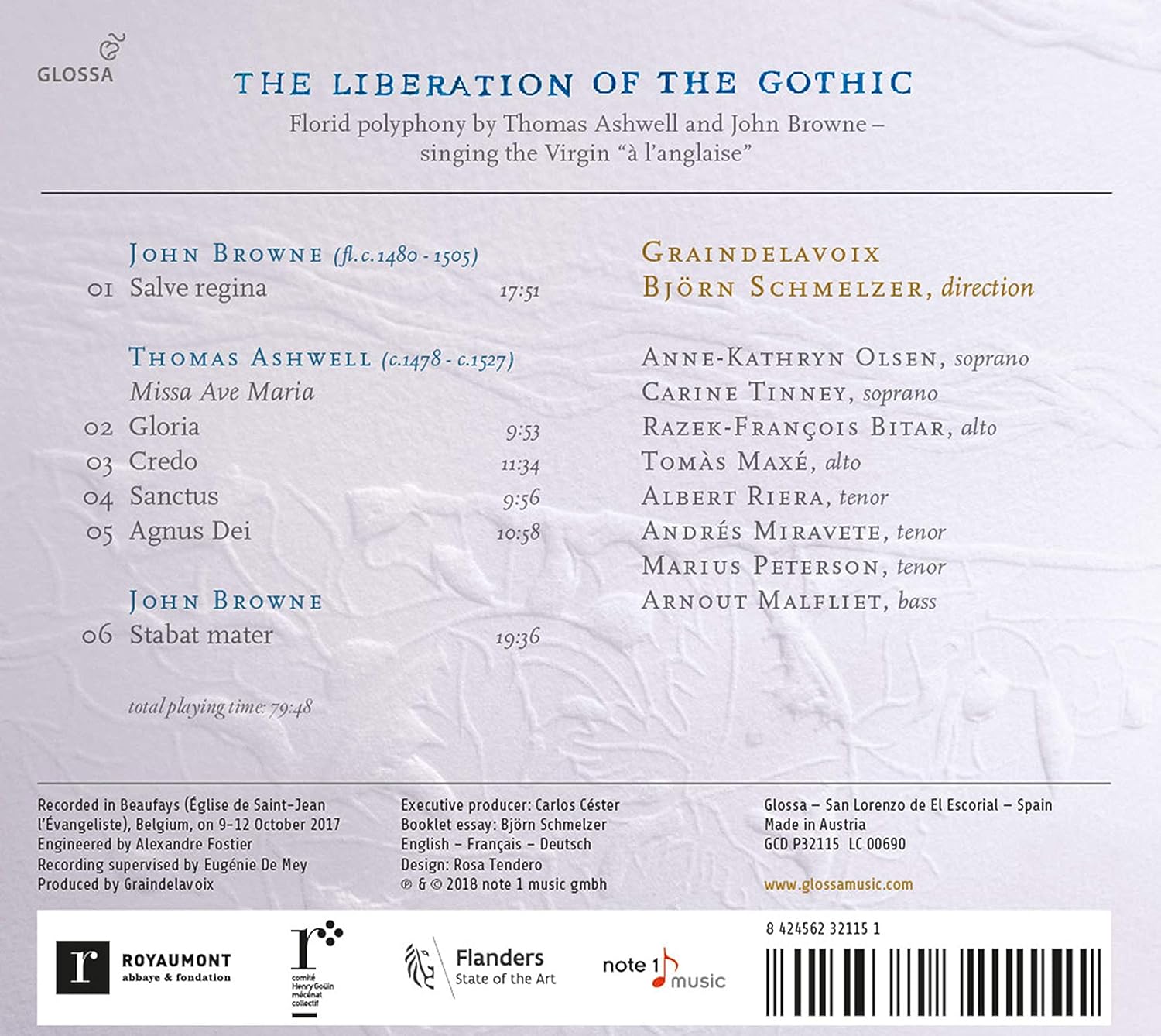 
I thought that I didn't have enough to say about the recent Binchois Consort album to be worth making a note, but now I'm thinking that it makes a good entry into a discussion of The Liberation of the Gothic by Graindelavoix: First of all, this is the former's second "multimedia" program around the English repertory from the Hundred Years War, in particular referencing alabaster figures of the Virgin, albeit only in the text that accompanies (and thus mediates) the musical program.

Such a trans-sensory exploration has a general appeal, even if I didn't find myself especially intrigued. In particular, I mostly found myself thinking — amid this generally appealing, mixed program — that there still aren't ideal albums devoted to Dunstaple or Frye. (The latter has had nearly everything recorded, in generally decent performances, but usually scattered in broader programs. The former not only has fewer dedicated albums, at least of late, than his stature might suggest, but arguably, has yet to even have a thorough presentation of his overall style appear on record.)

Returning to an orientation on The Liberation of the Gothic, then, both Dunstaple & Frye present parallels to Continental polyphony from the life of Dufay, the former with his early work, and the latter with his later mass cycles. In the following English generations, though, my interest tends to wane relative to Franco-Flemish polyphony (where it waxes), until reemerging around the mature post-Reformation style of Byrd et al., as again paralleling the Continent. (And in my case, it's the instrumental music that's of particular interest, likely — or simplistically — because the religious content of the sacred vocal works was strongly affected by political fashion. In other words, abstract musical considerations dominated instrumental music, although one cannot discount stealth messaging.)

One can attribute such a decline in the later fifteenth century exactly to the events circumscribed by the Binchois Consort series, the ultimate defeat of the Plantagenets in the Hundred Years War, and then the political & social chaos of the War of the Roses, during which the remaining Plantagenets were exterminated as a political force. The wars provide a historical context for what the music itself suggests, namely withdrawal & introversion: Enter Graindelavoix with their program of two Marian pieces by John Browne, as well as the especially florid Missa Ave Maria by Thomas Ashwell.

As the intro might suggest, it had been a while since I had given a serious listen to this repertory, as it had largely faded from my consciousness over the past two decades. Björn Schmelzer generally has intriguing things to say about his programs, though, and definitely tries to reimagine their contexts, so that provided my motivation to have a listen: Here, first of all, he not only makes the sensible observation that this era presents an opportunity to consider English aesthetics apart from strong Continental interaction, but further implies that since English aesthetics somehow came to dominate the world via Empire, we should better understand its early modern trajectory. (I agree that aesthetics are often more important than suggested by mainstream history, and so want to be sure not to imply that aesthetics followed Empire. The reverse is quite conceivable.)

On this point, I've already suggested a notion of withdrawal, and indeed a renewed cloistering of English creative practice, such that the Dissolution of the Monasteries (only fifty years after the Tudor victory) created a sort of slingshot effect: Ritual music that had only recently become even more privately oriented was suddenly forced into public view, including via new (emerging capitalist) forms of economic survival, etc. (One might further note that there was not a similar musical — as opposed to economic — withdrawal in the closing days of the English Empire. Indeed, the "English Invasion" of the Beatles et al. was anything but a withdrawal, such that the modern era arrived in England with a far different trajectory than it ended, and not even with a real inversion: A last grasp at world relevance, perhaps?)

Further, Schmelzer is concerned with a particular genre of private ritual, namely the veneration of the Virgin as exemplified in earlier generations by the English Ladymass. (And regarding patriarchy, veneration of the Virgin accompanied Christianity more generally, including throughout this era in Franco-Flemish polyphony, although perhaps nowhere more strongly than in England. After all, these people did ultimately accept a Queen, despite various contemporary laments. (And moreover, as discussed elsewhere [*], patriarchy actually intensified during the early modern period as a whole, so Schmelzer's liberation is more of a last gasp....))

He discusses these relations not with figur(in)es, then, but rather with architecture, and in particular, the Decorated Style — rather than the "solid" cathedral architecture of foundations, etc. In other words, and most of my remarks here are only inspired by Schmelzer, he's suggesting parallels (& inspirations) not with the free-standing architecture of cathedral building itself, but rather with the various internal "decorative" elements that suggest not only a womb-like sense of enclosure, but lend a general sensuality to those interiors.

In prior decades, I had characterized the distinctive aspects of Continental polyphony according to rhetorical "foundations" — as opposed to the more abstract, floral style in England — but Schmelzer's remarks suggest that such a foundation was not only rhetorical, but more literal: It suggests music with a free-standing structure of its own, its own sense of solidity, rather than as sonic embellishment of other structures (i.e. cathedrals). So what is the historical-technical basis for such a divergent summary?

One straightforward observation is that England's withdrawal was contemporaneous with "liberation" of the bass around Ockeghem, not the bass as another filigree part (as in e.g. the Ashwell Mass), and not simply to underline harmonies generated from the tenor, but as a structural element. Whereas "the irrational" remains prominent in Ockeghem's intuitive style, such a structural innovation was quickly placed into rationalizing contexts — i.e. large-scale, formal structures — by Continental polyphonists such as Busnoys & Obrecht. This is precisely the step that did not occur in England, and given Schmelzer's remarks, one might agree that an irrational sense of mystery was retained intentionally, and for religious reasons (that were demolished, particularly in England, by subsequent generations & their drive to worldly power).

As phrases & motifs move around seemingly at random, as even the bass is indulging in diminution, rather than "supporting," there is a resulting disorientation for the listener, apparently intended to bring about religious insight. (And that such a sense of mysticism is more Catholic than Protestant is clear — even as Catholicism had developed a rather practical medieval philosophy as well.) Moreover, was such a capricious work as Ashwell's Missa Ave Maria constructed to trigger particular chapel resonances (& so messages from particular sources within the chapel decor)?

Schmelzer does not suggest as much, but recall that similar claims have been made regarding Machaut's Nostre Dame Mass.... A very specific physical setting might have been involved (whereas writing for a non-specific setting might have inspired on the Continent, as manuscripts increasingly traveled). That said, and note that Ashwell's six-voice setting is roughly contemporaneous with the greatest cycles of Josquin & La Rue, not to mention to have become a significant influence on John Taverner, and thus on the post-Dissolution English musical world, his generation (the immediate pre-Dissolution generation) seems to have taken this sense of irrationality to its height.

(And note that, lacking the Kyrie, English mass cycles start out with an unwieldy text, rather than one more suitable for establishing motivic relations. So a style yielding a sense of mysticism likely emerged from other constraints as well, although once again, there are chicken & egg questions: Which came first?)

In the generation prior, as represented on The Liberation of the Gothic by the extended pieces by Browne, the Eton Choirbook is relatively more rational — if lacking the bass developments just noted. Indeed, Schmelzer makes an Obrecht comparison himself, and that's where my mind went, to the antiphons in particular. (I might also note a structural affinity to the long mass cycles by Faugues, in e.g. Browne's extended Stabat Mater: Phrases are linked similarly, although Browne injects more variety, while Faugues develops some early textural climaxes. And the structural foundation on the Continent allowed musicians to build long-form climaxes — beyond simply shifting revelry & in accord with a rhetorical impetus.)

Obrecht's soaring lines do sound analogous, even if Obrecht's sense of structure becomes apparent in the written score (& so subliminally to the ear?), and moreover, one should probably associate "sensuality" with Marian music more broadly.... Such a soaring style then yields the even more filigreed & diversified settings of Ashwell et al., such that the "ethereal" English sound, as beloved by both the Restoration & twentieth century revival, begins to appear — only to transform into the gritty, grounded Elizabethan style. (And note that it was left to English consort music to explore a subsequent fascination with bass....)

So all that said (and the complexity of my textual interventions is probably confusing too...), I do enjoy the Ashwell mass, although "intended to confuse the listener" is not generally my preference. (But frankly, why shouldn't it be? I've been fighting the overly rationalized for years.... I still believe in actual teaching at some point, though, not simply confusion!) Graindelavoix generally provides excellent, energetic performances, and this is no exception. Perhaps the result is too resonant, but then, maybe that's intentional too. Does the music evoke the (invaginated?) intimacy of a lady chapel? Does e.g. Ockeghem evoke (sensuous) physicality per se in his relatively early Missa L'homme armé? Perhaps. And specific music aside, thanks go to Schmelzer for provoking thoughts on cross sensory modalities in these more specific historical terms....