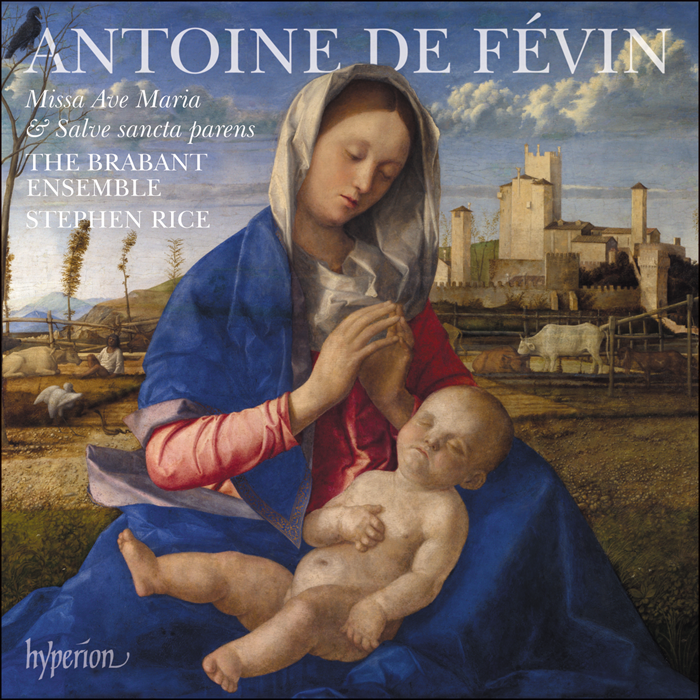 
Finally (for this little burst of entries), to step back into a more technical orientation, particularly after enjoying their La Rue disc (& the Missa Inviolata — another setting on the Virgin — in particular), I want to turn to The Brabant Ensemble's new Févin program: This is another very long album from them, packing in a lot of material (& unfortunately using far too many track markers, as the Tallis Scholars also did on their new Josquin album), and supported by a quality technical discussion from Rice.

Regarding the prior rant, I do often find Rice's group to be too "pretty" & distant, but he does take a thoughtful (& not modernist) approach to tuning & ficta, and so brings out a wealth of detail in phrasing, etc. So that's good (& I believe that he, along with Hyperion in general, reacts to the public preferences I mention below by simply recording more quietly & with less presence, which isn't ideal either...). So that said, Rice makes a good case for hearing more from Févin, and this is an important program to extend his large-scale discography beyond the Requiem.

Févin actually died before both La Rue & Josquin, although he was apparently younger & writing in a somewhat newer style: Indeed, the sometimes light tone (& homophonic or alternating passages) suggest a later orientation (i.e. anticipate modern smugness), but there are significant technical challenges as well, particularly in working Josquin's famous Ave Maria into a mass cycle. The latter is an example of early parody technique, and seems to place the structural aspects almost secondarily: There's a sort of "prettiness" to the music, almost to the point that one might talk of "decorating" a structure, and that's what Févin emphasizes. And it's quite decorated — although in a very different mode from the swirling weirdness of the contemporaneous Missa Ave Maria by Thomas Ashwell (as discussed via swirling weirdness here in September, and as largely absent such a structural skeleton). This is the sort of style that leads into word painting, etc., and a comparison goes some way toward answering Schmelzer's call for a consideration of the distinctive quality of English (musical) aesthetics at this particular (almost early modern) moment. (There's also the little swap, an English group doing Continental music & vice versa.)