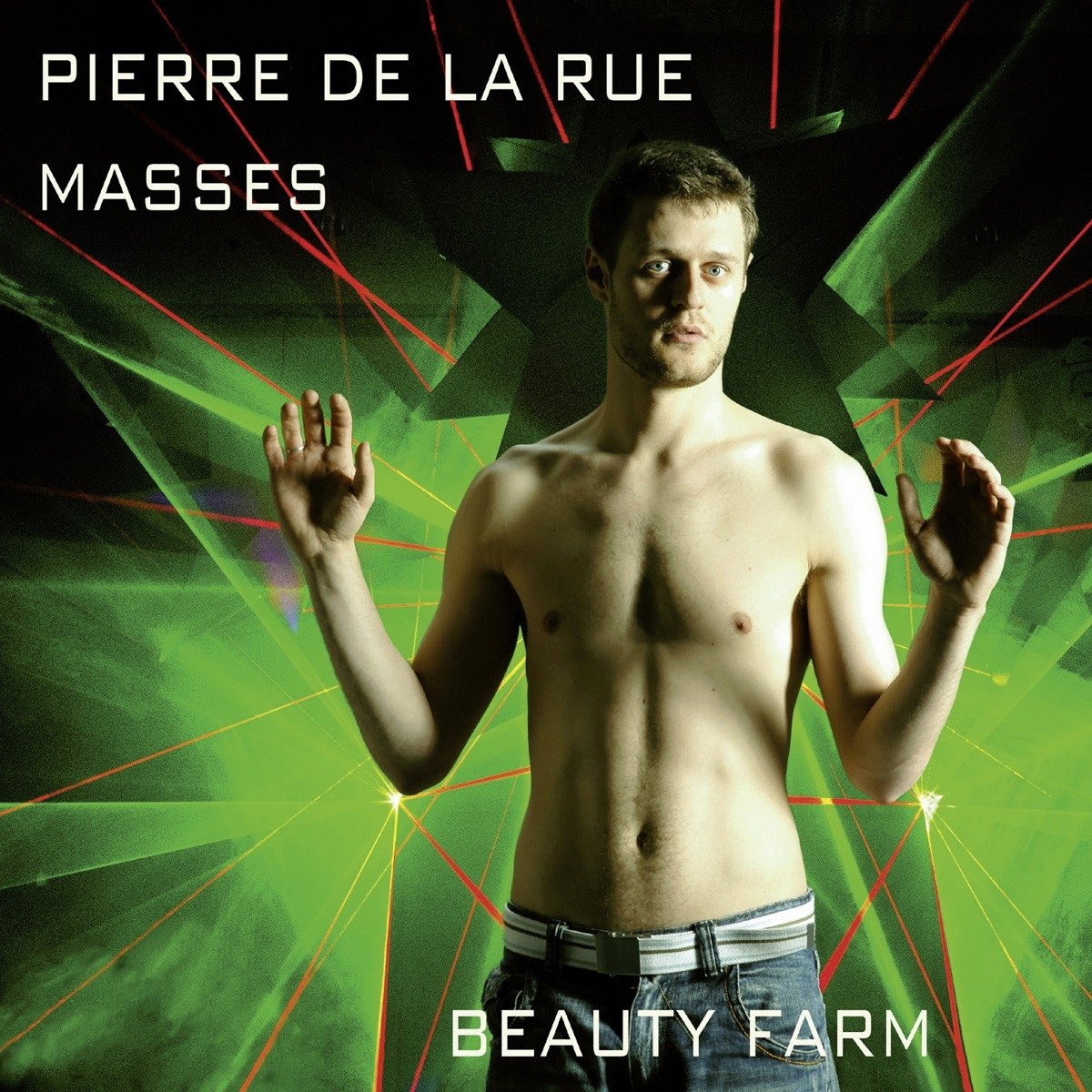 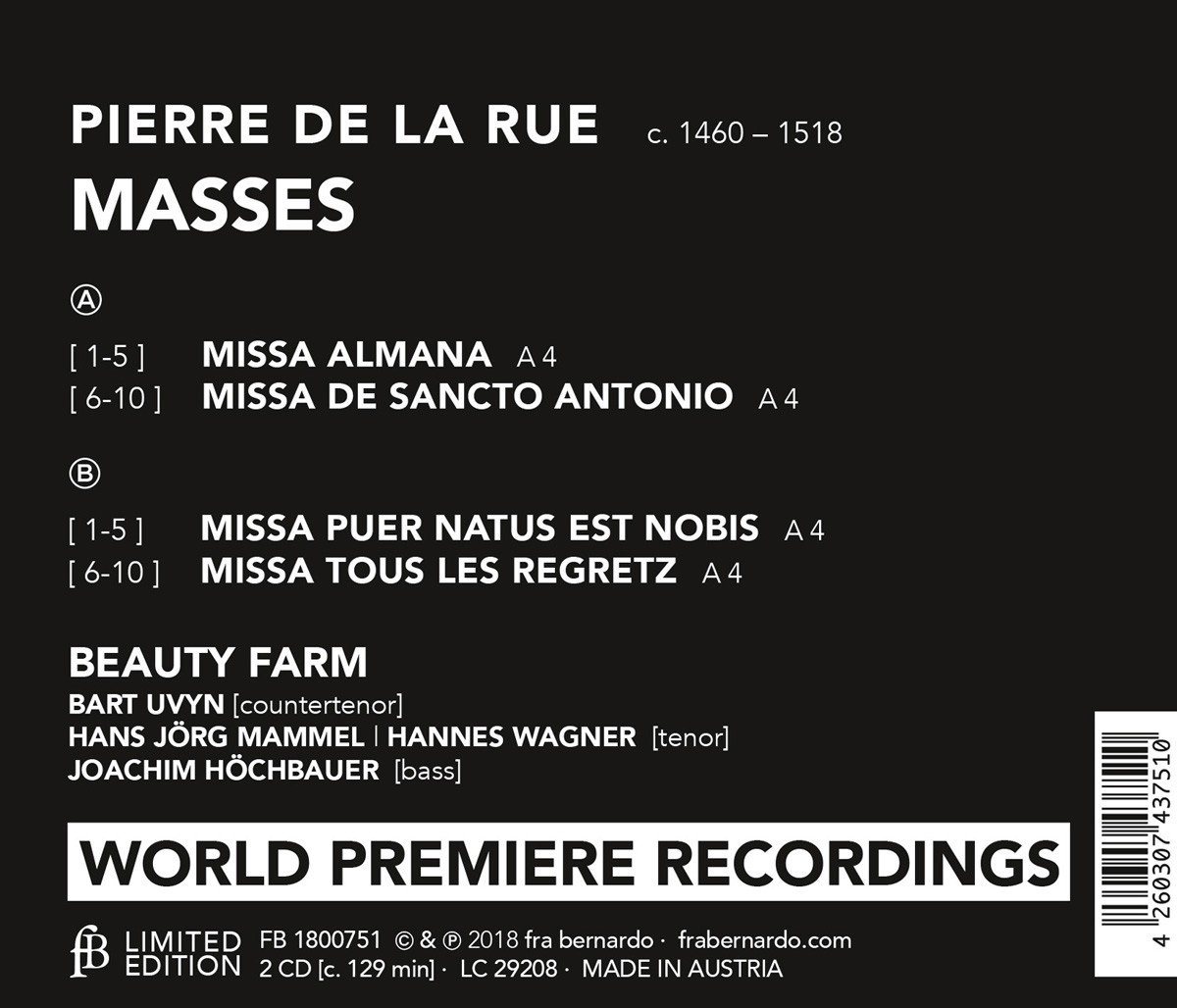 
I was expecting to enjoy the new La Rue double album by Beauty Farm, but it has exceeded expectations: Whereas I was most looking forward to another Missa Tous les regretz recording (as one of La Rue's most characteristic late parody masses on his own material), and had become intrigued with the Missa Almana (perhaps La Rue's first mass cycle, which is interesting enough) after it had been repositioned (again) as Missa Pourquoy non by William Kempster (including by his own recording from 2007), I didn't expect the other two masses to be especially notable.

However, perhaps in part because of the emerging performance practice, meaning that these cycles are better interpreted & expressed than most others of the period at this point (in part by virtue of being the most recently addressed), the relatively early Missa Puer natus est & Missa de Sancto Antonio make strong individual impressions too. These are all four voice cycles, the similar forces contributing to the overall power of the program, meaning that they exist (particularly the one later cycle, Tous les regretz) in something of a different series from that of the five-part cycles (or the six-part "unicorn").

They're also, as opposed to the "premiere" assertion prominently displayed on the package, all second recordings, the first having been made by Kempster or Michel Sanvoisin in all four cases, which is curious enough: One might go on to ask what "really" constitutes releasing a premiere recording, but particularly given the analysis Kempster has published on Pourquoy non, the production thus comes off as somewhat underinformed or even disrespectful. (Nonetheless, although taking up some of Kempster's observations would have undoubtedly improved the Missa Pourquoy non interpretation, the result is impressive. That said, Kempster's recording, with amateur singers, is a credible interpretation too. Sanvoisin has likewise been focusing on La Rue for a long time, having recorded six mass cycles, plus a handful of other pieces, over the years.)

The notes do make mention of the historical Pourquoy non ascription, but not of the more recent literature. I also find the suggestions that La Rue's reputation was mainly based on his mass cycles, and that he never surpassed his early works in the genre, to be flatly inaccurate. That said, perhaps the author is implying that La Rue's motets (as opposed to his chansons, which are clearly at the apex of their genre, or even his diverse "ritual works") are of relatively more modest stature (as a group) — and simply asserting (correctly) that La Rue's early cycles are not to be missed.

All that said, this double album was an easy addition to my personal list, and something I've enjoyed over & over since receiving it from Germany only a couple of weeks ago: Both program & interpretation are so impressive! Although I'd still like to see Beauty Farm release more motet programs, this set of four mass cycles really shows how far interpretations of music of the period have come: It's one of the most compelling such albums ever to appear, and the fact that it consists of music that had been relatively anonymous speaks for itself. Exceeding (high) expectations is a wonderful thing, especially when so much from our contemporary moment (& so much more than medieval music recordings!) has been underwhelming (or worse)....