Cipriano de RORE. Portrait of the Artist as a Starved Dog — Graindelavoix 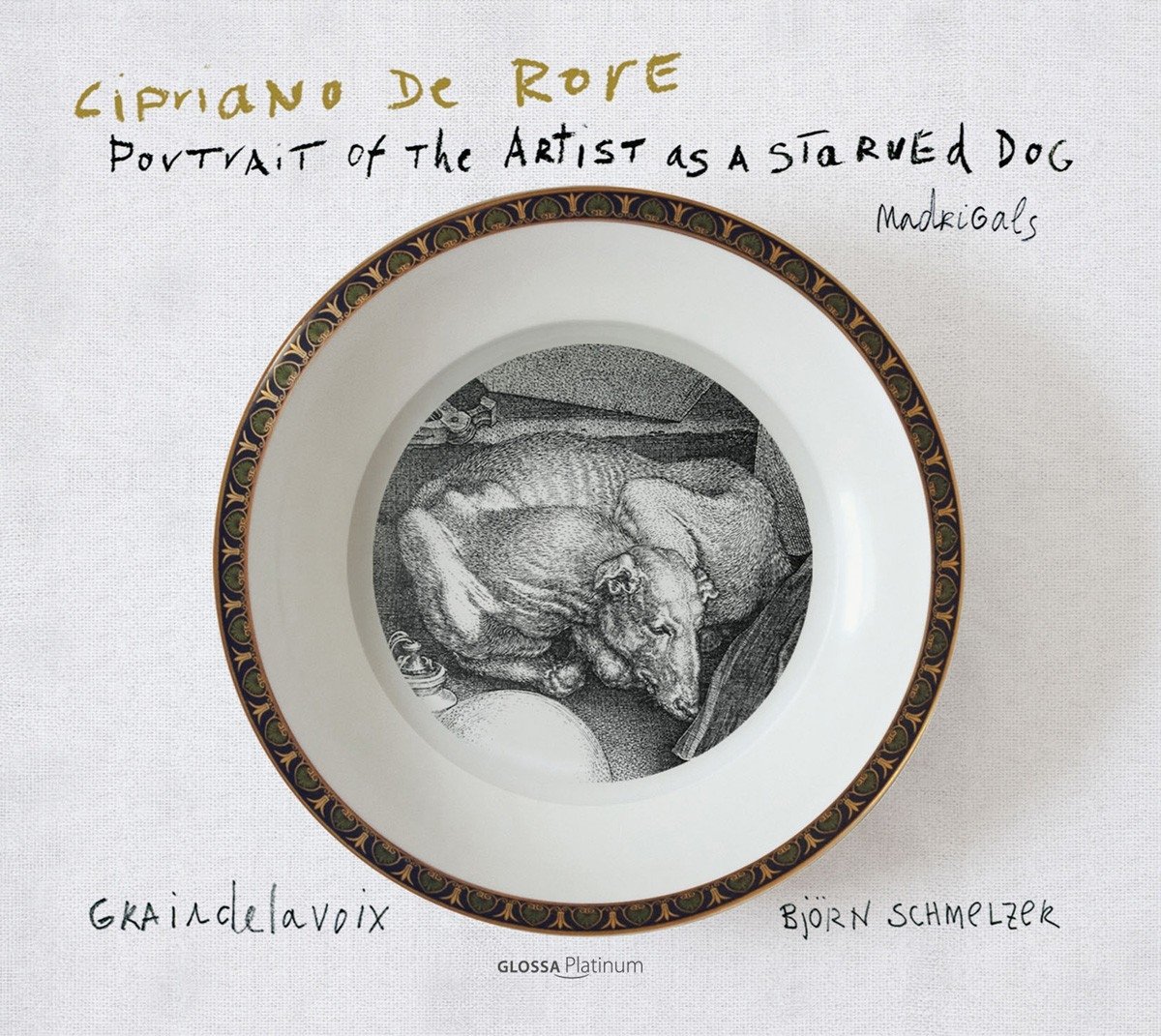 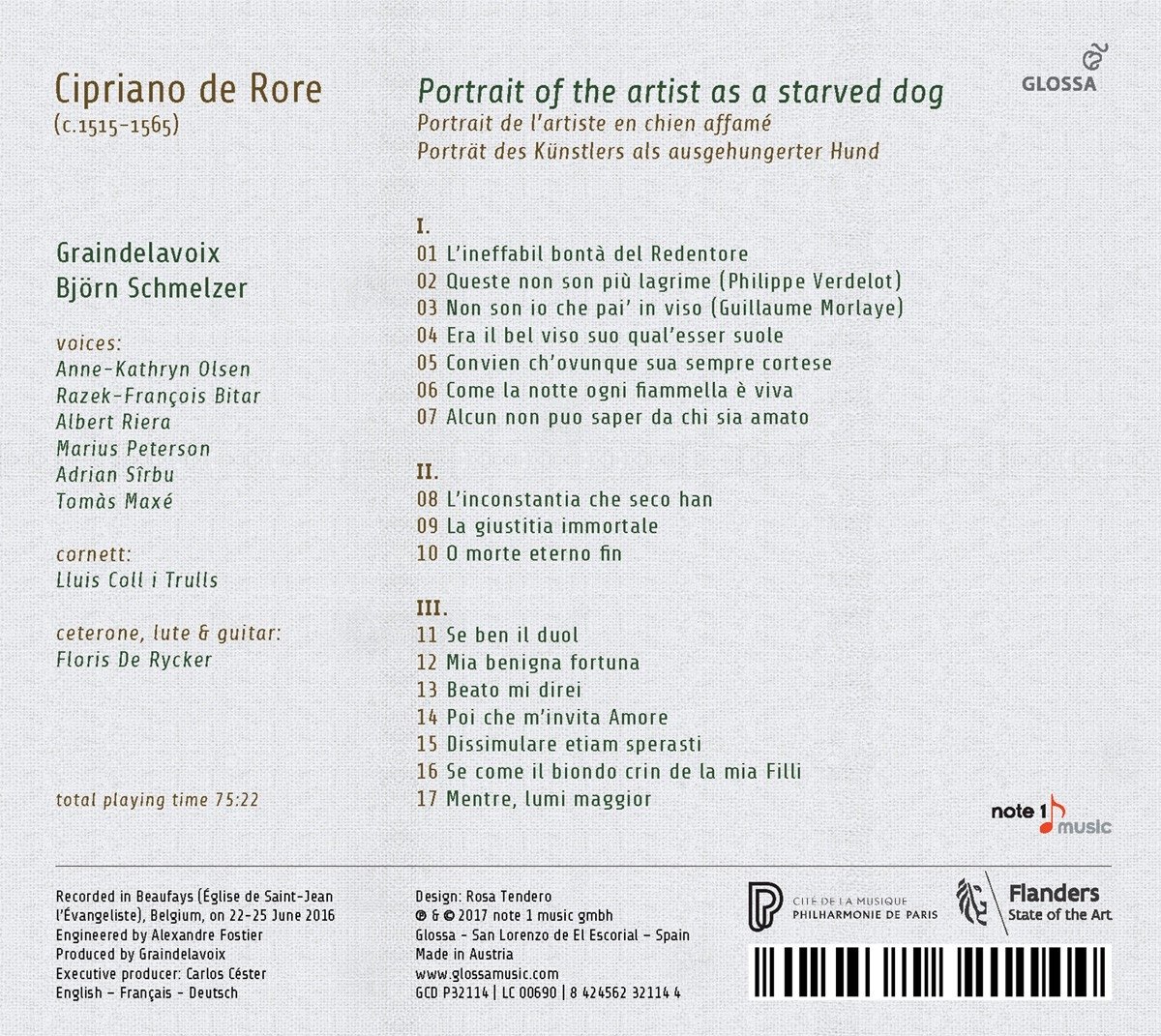 
Although it's later music than I most often mention here, I wanted to make a few remarks about the new album by Graindelavoix featuring Cypriano de Rore, Portrait of the Artist as a Starved Dog.

First of all, Björn Schmelzer discusses the title in relation to both actual portraits of De Rore & an image by Dürer (with the "actual" starved dog), as well as in relation to notions of "divine" artistry applied (not for the first time) in the sixteenth century, e.g. especially to Michelangelo.

The program focuses on Rore's madrigals, but also includes secular motets, a hybrid genre of the period with similar themes & expressivity, and divides his output into three phases. They also approach the singing without diminutions, and so despite some instrumental accompaniment, produce a rather austere reading: Yet this is precisely a reading that illuminates Rore's previously unprecedented emotional range.

I've generally found Schmelzer's interpretations to be thought provoking, and as the forgoing remarks suggest, this is no exception. It's also not unusual for me to be drawn more to interpretations of later music by musicians who have mostly worked with earlier music — rather than the other way around — and Graindelavoix bring a firm fifteenth century (& even Ars Antiqua) footing to this mid-sixteenth century repertory. From the perspective of a medievalist this music is indeed late, but from a perspective critiquing Western global imperialism (the world-defining activity of the historical "modern era" per se), it's early: One can note the (relatively novel, then, to become more common with Monteverdi et al.) turn to imperial (Greek & Roman) antiquity for themes & inspiration, and one can ponder the emotionality (differing from the relatively staid previous couple of generations) in response to world conquest. Rore was writing a couple of generations after the epochal change announced by Columbus' voyage — barely longer than we are now from the end of the modern era (by my rough periodization, as e.g. articulated elsewhere) — and so one can further note the uncertainty, the tragedy, the interrogation of hubris & anguished human feeling deriving from the antique thematic material.

Such an orientation is in sharp contrast to the feelings of mastery that would be consolidated with the so-called "enlightenment," i.e. the era of the subsequent "classical period" in musical terms, and is moreover prior to the regularization of rhythm e.g. via bar lines (definitively with Corelli), not to mention the (anti-polyphonic) hierarchical rigidity of recitative-continuo style. One can in turn note the impetus toward elitism deriving from these neo-imperial concerns, not only the far-flung dramatic material (that would soon manifest even more spectacularly in the "opera" genre, particularly as it came to emphasize the soloist), but the separation of "the composer" from humanity more generally — as implicitly traced by Schmelzer's discussion of divinity. (And indeed the rise of portraiture per se in this period marks a rethinking of the subject in modern terms.)

In other words, this music retains the feel of a newly globalized class structure becoming intensified & yet still distended — much as now: This is music of extremes (articulated quite persuasively by Schmelzer & his group), with nothing cute or quaint. It traces a human tragedy that the "divine" De Rore was still able to feel directly — if articulate indirectly. (There is nothing of the smug perfection of e.g. Mozart here, although one might also contrast the systemization of musical affect by e.g. Marini, writing only fifty years after Rore.) This is dangerous music, without a (conceptual) net, and so some of the most dynamic to witness & grapple with the early modern (epochal) transition.